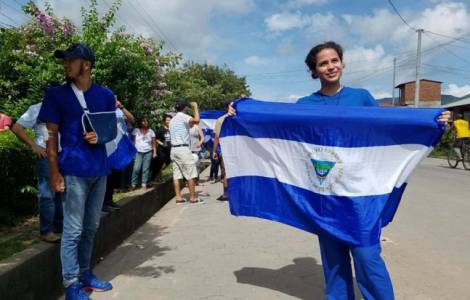 Managua (Agenzia Fides) – Nicaragua on Tuesday at dawn released more than 50 political prisoners. Hundreds of people danced in the street amid music. Many were greeted with hugs and tears by family members waiting outside the prison.
Mgr. Silvio Baez, Auxiliary Bishop of the Archdiocese of Managua, currently in Rome, posted the video of peasant leader Freddy Navas who thanked God, the Bishops and the Church for teaching him not to lose hope, and asked the Bishop to pray for peasant leaders and for Nicaragua.
Throughout the day on Tuesday 11 June, Nicaraguan social media was flooded with messages of pride and joy. Politicians, journalists, entrepreneurs, students, ordinary citizens and peasants, all the political prisoners who were in prison, gathered in the streets waving the national flag in their hands, a symbol of the new Nicaragua since April 2018.
The news provoked innumerable reactions from the Organization of American States, the Inter-American Commission for Human Rights, the United Nations High Commissioner for Human Rights, ambassadors, presidents of other countries, international human rights activists. Another source of Fides wrote on social media: "Nicaragua has today experienced that indescribable feeling of regaining the freedom of political prisoners".
The Archdiocese of Managua has also published a message, signed by Cardinal Leopoldo José Brenes, Metropolitan Archbishop of Managua: "Let all the prisoners be freed, this will bring joy to all families, and may all those who have been deprived of their liberty live freely in their own country".
The release of these political prisoners is part of the amnesty law passed by the Parliament in Nicaragua with the votes of the Sandinista majority and disapproval of the opposition gathered as the Alianza Civica. According to the latter, there are still 89 political prisoners who are in prison. The law has been contested because it is presented as a provision of clemency, foreseen by the previous agreements reached at the national dialogue table in recent months, but without guaranteeing the freedoms and rights of citizens.
President Ortega had promised to release all political prisoners within ninety days, ie by June 18, just before the evaluation of the Nica Act (Nicaraguan Investment Conditionality Act) and the General Assembly of OAS, to be held in Medellin, Colombia at the end of June. (CE) (Agenzia Fides, 12/6/2019)