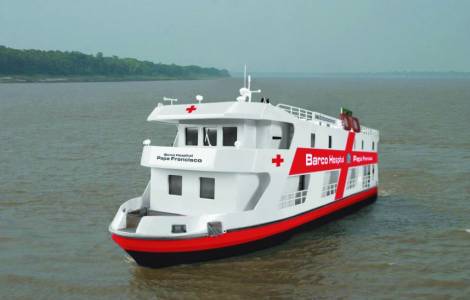 2021-11-17
Opening of the Jubilee Missionary Year: "The Church in a permanent state of mission"

2021-11-05
Different and convergent approaches to mission: the course for Ad Gentes missionaries

Juruti (Agenzia Fides) - The Franciscan Friars of Assisi in the Providence of God and the association of lay people who accompany it are completing the preparations to launch, next July, the "Pope Francis" hospital ship which will bring the Gospel and health assistance to over 700 thousand inhabitants of Amazonian areas reachable only by river, in the Brazilian state of Pará.
According to the data that the congregation provided Agenzia Fides, the 32-meter ship houses the country's most complete floating hospital, with facilities for diagnosis, treatment, hospitalization and prevention in medicine, ophthalmology, odontology, surgery, and laboratory analysis, infirmary, vaccination room and machinery for radiography, ultrasound, mammography…. The ship will depart from the port of Óbidos with a crew of 10 people (including a religious) and 20 medical and paramedical volunteers (including university professors and students) and will visit about 1,000 coastal areas in 10-day expeditions, using two motorboat- ambulance for a first survey of the health situation of each area and for emergencies. The expedition will collaborate with the local hospitals of Juruti and Óbidos.
In times of floods, it will also serve as a rescue boat. The initiative originated from the visit of Pope Francis to a hospital in Rio de Janeiro, on the occasion of World Youth Day 2013, when the pontiff asked the founding priest, friar Francisco Belotti, if they were present in the Amazon.The reply was a no and the Pope simply replied "Then you have to go". As a result, the association and the fraternity took charge of the two hospitals mentioned, which were closed. Soon we "perceived that the population that lives on the banks of the river had considerable difficulties in reaching the hospitals - friar Francisco tells Fides - and then we understood that the only way was to make the hospital go to them".
The mission will be coordinated by a priest of the fraternity, in charge of bringing the Word of God to the population visited, as well as ensuring the rich approach of humanity and dignity of assistance. The construction of the ship was possible thanks to an agreement with the State, which allocated the proceeds of compensation for collective moral damage to the project at the expense of Shell Chimica and Basf SA, following an environmental accident that caused at the time 60 fatal victims and other huge damages. (SM) (Agenzia Fides, 1/6/2019)

ASIA/MYANMAR - ASEAN appeal for humanitarian truce; petition to the UN to confirm the ambassador

AMERICA/CHILE - Chilean men and women religious: candidates in the next elections must be up to the task