AMERICA/COLOMBIA - Urgent appeal for Venezuelan migrants: the crisis is out of control, the flow is growing and is worrying 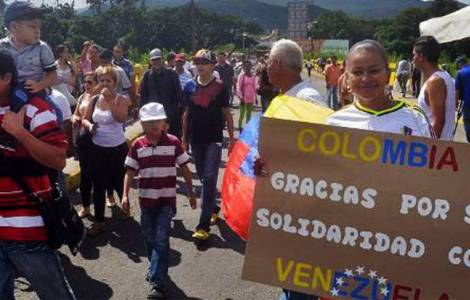 Cucuta (Agenzia Fides) - Colombian Foreign Minister Carlos Holmes Trujillo, called on Wednesday 22 May for greater economic cooperation by the international community to help Venezuelans who emigrated because of the crisis in their country. "We appreciate international cooperation, but the migration crisis continues to grow and the near future is worrying", said Holmes Trujillo at a press conference, the text of which was sent to Fides.
According to the Colombian official, 1.3 million Venezuelans arrived in Colombia, but the flow continues to grow and more than 63,000 Venezuelans cross the border daily, of whom 2,500 remain in the country. Citing the estimates of the IMF (International Monetary Fund), the minister said that Colombia needs 1.5 billion dollars to assist migrants and refugees. This appeal is "urgent", underlined Holmes Trujillo, because Venezuelan migration is "out of control".
The confirmation of this "massive flight" also comes from the President of the Episcopal Conference of Venezuela, Mgr. José Luis Azuaje Ayala OCD, Bishop of the Diocese of Trujillo, who in a recent interview with the press said: "We Bishops are often accused by the government of being opponents. What is certain is that if being on the side of the poor means being in opposition, then yes: we are in opposition". Mgr. Azuaje added that "A channel for humanitarian aid must be opened urgently. There are millions who flee".
Janeth Marquez, director of Caritas Venezuela, pointed out: "we have almost 4 million Venezuelans who have left the country with a huge social cost: broken families, children and elderly left alone. Caritas Venezuela is doing everything possible, but we have limited means. "We call for the urgent opening of a channel for humanitarian aid. This crisis is destroying the lives of all Venezuelans. The majority of children born in the last five years are growing up in a condition of chronic malnutrition".
The Colombian Church, almost the only institution that actually welcomes Venezuelans, denounces that its structures for migrants are at the limit of its capacity. The Diocese of Cucuta, near the border, in coordination with the Venezuelan diocese of San Cristobal, is perhaps the only one that manages to give migrants something to eat in Colombian territory and, on special occasions such as Holy Week, also to send help to Venezuelan Churches. In 2019 Cucuta sent one million hosts and about 50 liters of wine for mass to the Venezuelan communities.
The situation at the border has unfortunately worsened, because the need to feed the migrants has been compounded by the insecurity caused by certain paramilitary groups that occasionally collide with each other or with members of the Colombian law enforcement. Thus migrant groups become more vulnerable and cases of xenophobia against Venezuelans begin to appear among the population.
"This is the largest and most serious migration of the continent in its history", said Mauricio García Durán, director of the Jesuit Refugee Service for Latin America. "The most difficult situations that have been recorded concern health needs - he stresses - women and children are the main victims, which is why the demand for health services has risen dramatically - there is a crisis in the health system on the border, for example, in the University Hospital of Cúcuta, on the border with Venezuela , 70% of women who give birth are Venezuelan". (CE) (Agenzia Fides, 24/5/2019)

ASIA/MALAYSIA - Archbishop of Kuala Lumpur to the faithful: "Stay safe and be holy"