AFRICA/CENTRAL AFRICA - "The arrival of thousands of Peuls with millions of cattle destabilizes the south-east" says Mgr. Aguirre 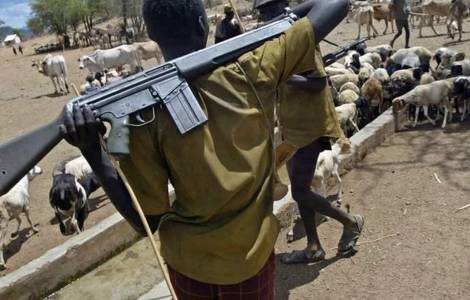 2019-07-04
Agreement for the repatriation of more than 295,000 Central African refugees from Cameroon

2019-06-07
A missionary: "Violence, massacres, wild exploitation of resources in the Country"

Bangui (Agenzia Fides) - "The local warlords are facilitating the progression of the Peuls herders in our area, creating alarm among the population", says His Exc. Mgr. Juan José Aguirre Muños to Agenzia Fides.
"Throughout the Sahel the transfer of the Peuls (or Fulani) with millions of cattle is destabilizing entire areas of Nigeria, Niger, Burkina Faso, Cameroon, Chad and now the Central African Republic, due to the conflicts they stir up", explains Mgr. Aguirre.
"The cause of this displacement is the desertification that forces the Peuls to go on searching for new pastures and water sources. Unfortunately the Peuls, who are well armed, leave a trail of blood during their journey that gets longer every day", says the Bishop. "They have created a corridor that descends from Chad and arrives in Central Africa in the area of N'Délé, in the north. From here they descend down towards Bangassou in the south-east through the missions of Zémio, Boqui and Obo. There are thousands of men, women and children with their herds heading to our area".
Mgr. Aguirre does not hide his concern because "if the flows were to continue at this rate, within a few years, Peuls could reach two million in the south-east of Central Africa. Local people are alarmed about their future. What is certain is that everything is being done to open corridors through which the Peuls pass in search of water and pastures. The warlords have called for the transformation of a part of the Obo mission area into a natural park in order to drive out farmers and allow the settlement of the Peuls with millions of cattle". "This is a part of the war we are experiencing in Central Africa he adds. "One of the warlords linked to the Peuls is Ali Darassa, a Nigerian Fulani (Peuls), and is the main organizer of these corridors"
"We understand the drama of the Puels, victims of desertification, but no one has asked permission from the Central African populations who already live in very harsh conditions. Furthermore, the Peuls are Muslims and the local populations are Christian, accentuating the inter-religious tensions already present in Central Africa, adds Mgr. Aguirre, who has welcomed two thousand Muslims in Bangassou Cathedral for two years, threatened with death by the local anti-Balaka gangs (see Fides, 24/7/2017).
The Peuls displacement risks involving other Countries. "In February - says the Bishop - several Peuls with their herds crossed the Bomu river, settling in the forest of Garamba, in the north of the Democratic Republic of the Congo, where there are abundant pastures. However, the Congolese army strongly rejected them in Central Africa". (L.M.) (Agenzia Fides, 23/5/2019)

AFRICA/NIGER - "Threats against Christians in the area of Bomoanga and targeted killings for others", reports a missionary