AMERICA/URUGUAY - The mission "Everyone’s home": two thousand lay missionaries in the streets of the capital to meet those who moved away from the Church 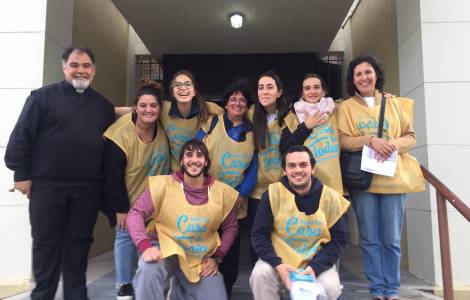 2019-09-27
Extraordinary Missionary Month: "we must all take on the responsibility so that everyone meets Christ"

2019-05-21
The mission "Everyone’s home": two thousand lay missionaries in the streets of the capital to meet those who moved away from the Church

2019-03-14
Towards the Missionary Month: promoting the same vision of the Church that goes forth, strengthening the leadership of the laity

2019-03-11
The Bishop of San José de Mayo: "a pastoral reconfiguration to put everything we are and we have at the service of the mission"

2018-07-27
Towards the cause of canonization: Salvador García Pintos: a politician, doctor and father

2018-05-04
Confirmation of the National Director of the PMS, Fr. Leonardo Rodriguez

Montevideo (Agenzia Fides) - "Come, come back!" The invitation of the archdiocese of Montevideo is carrying out the mission "Everyone’s home". A note sent to Agenzia Fides explained that, during the last three weekends, between 1,500 and 2,000 lay missionaries of all ages, identified by special waistcoats, traveled two by two on buses, squares, markets, traffic lights, to invite "to live faith" and to meet in parishes. The motto of the missionary action was "Listen, announce and invite".
The young Agustina Pérez Jourdan, of the Salesian Nazarenos movement, animated the mission in the Paso de las Duranas area, together with the parishioners. "I have been taking part in the missions for ten years, but it was the first time I did it in the city, and I was amazed by the reception of the people", she told Fides. "The response of the people was fantastic". Many people welcomed the missionaries with cordiality", says Agustina. "We did not carry the Bible, but a different announcement of Christ for everyone, starting with listening".
In 23 points of the city, between 9 and 11 May, moments of re-encounter were held with the invitation: "Jesus is waiting for you: come and see". These meetings were an opportunity to get to know one’s neighbors, to pray, to play and sing together, and to "listen" to those who had moved away from religious practice perhaps for many years and, for them, to discover "the other side of the Church", which is, precisely, "everyone's home".
The participants were invited to re-enter the life of the Church through groups of various natures or through a journey of catechesis in four stages. According to data from the archdiocese, from 1994 to 2014, participation in the Sunday Mass halved in the capital. Since 2014, the phenomenon seems to have stopped, said Cardinal Archbishop Daniel Sturla in a recent radio interview. (SM) (Agenzia Fides, 21/5/2019)