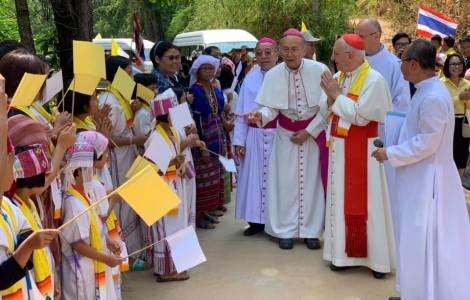 2020-07-03
The PMS Fund for the Covid emergency has sent aid to the dioceses of Benin, Madagascar, Senegal

Chiang Mai (Agenzia Fides) - On Sunday 19 May Cardinal Fernando Filoni, as part of his pastoral visit to the Asian country (see Fides, 15/5/2019) went to Chiang Mai, in northern Thailand, where there is a strong presence of tribal populations. Here he met priests, religious, catechists and senior village leaders, then celebrated Mass in the Cathedral.
The Diocese of Chiang Mai is now a mother Diocese because it has given birth to a new Diocese-the Diocese of Chiang Rai, last year (see Fides, 26/04/2018). This circumstance bears witness to the growth of the Church in this region, and offered the Cardinal the opportunity to express the heartfelt appreciation of the Congregation for the Evangelisation of Peoples to pastoral workers "for the generous contribution to the work of evangelisation under the guidance of the Bishops", encouraging them to continue "all the more in this worthy apostolate".
"The work of evangelisation is a single but a complex reality - the Cardinal emphasized in his speech -. The pastoral dimension of this Region includes, first of all, the presence of various ethnic groups, or tribals or indigenous people with identity of their own. The programme for mission work involves a careful study of and due respect for the beliefs, customs, cultural values and traditions of the people in the area, in the light of the Christian teachings. In particular, one should take into account the predominantly Buddhist environment prevailing in this Nation". The field of evangelisation also includes changes in the society, various trends, social challenges, thinking patterns, relativistic approaches, changes on the existing value system of the society, the understanding of marriage and family, the dark side of the social media networks...
"The first form of evangelisation is witness - reiterated the Cardinal -. The witness of a Christian life is the first and irreplaceable form of mission". Even "inter-religious dialogue is a part of the Church’s evangelising mission", he continued, stating that "dialogue is not in opposition to the mission ‘ad gentes’. The Church sees no conflict between proclaiming Christ and engaging in inter-religious dialogue. Dialogue becomes a path of the mission". He then stressed the importance of dialogue with the followers of Buddhism, in particular, and with those of other religious practices in the Region. "Furthermore, dialogue is a necessary condition for peace and harmony in the society and contributes to explain the social dimension of the Gospel message to those who do not know Christ and his teachings".
The Prefect of the Congregation for the Evangelization of Peoples therefore addressed the various groups of pastoral workers. To the priests, collaborators of the Bishops with whom they share the responsibility of the universal mission, he recommended to coordinate missionary work in the parishes, making them "places where the missionary action of the Church takes a concrete expression". Appreciation and encouragement he then expressed for the many religious institutes, engaged in different types of apostolate with which they bear witness to God's love. "The Church’s mission ‘ad gentes’ offers consecrated women, religious brothers and members of secular institutes special and extraordinary opportunities for a particularly fruitful apostolate", he said.
The numerous catechists (both full-time and part-time) involved in missionary work are appreciated and considered in a particular way by the Congregation for the Evangelization of Peoples, "because, under the direction of their pastors, they contribute immensely to the work of evangelisation in the mission territories". Finally he thanked the elder leaders of the villages, whose presence "is a testimony to the role of the laity in the missionary action of the Church", for their cooperation in presenting Christ, and in building peace and harmony between people.
Cardinal Filoni then presided over the Eucharistic celebration in the Cathedral of Chiang Mai, dedicated to the Sacred Heart. In the homily he commented on the readings of the day, focusing in particular on the commandment of love. He reminded the families present that they "have an an important contribution to make to the mission of the Church", since "the Sacrament of Matrimony is God’s gift to humanity to bear witness to God’s love. As husband and wife, the couples are to live this commandment of love in the context of a family. By leading an exemplary life of faith and being conscious of their responsibility towards their children, Christian parents bear testimony to Christ’s commandment of love". (SL) (Agenzia Fides, 20/5/2019)