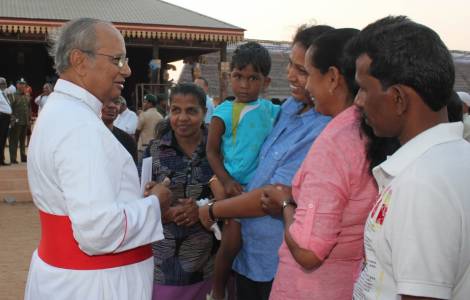 2019-10-28
Vote with conscience and attention to the common good: the Church indicates the criteria for the presidential elections

2019-05-03
The Federation of Asian Bishops: "No to retaliation and revenge: may mutual love prevail"

Colombo (Agenzia Fides) - While Sri Lanka celebrated, on May 18, the 10th anniversary of the end of a war with the Tamil rebels, "the Catholics of Sri Lanka, in a moment of tension and fear after the Easter attacks, confirm their commitment to the common good, sustainable development, peace, security and reconciliation in the country", says to Agenzia Fides Leo Fernando, a lay Catholic in Colombo.
Fernando says to Fides: "It is painful to remember that the country suffered so much because of the civil war. In recent times that immense suffering has returned in our lives, with the Easter attacks that killed 258 people, and now we find ourselves having to face the challenge of religious extremism and terrorism".
The Sinhalese (majority) and the Tamils (ethnic minority) are the two main groups that make up the nation. The civil war lasted 26 years, which started in 1983, and caused over 100,000 dead. Several cases related to this conflict are currently being examined by the UN Human Rights Council, which assesses human rights violations committed at the end of the war. Ten years after the end of the conflict, the United Nations estimated that 40,000 civilians were killed in the last few months of the fighting, when the government launched the final attack on the Tamil Tigers, and urged Sri Lanka to investigate alleged crimes of war committed by both parties. Meanwhile in the nation the disputes and claims existing between the two communities, Sinhalese and Tamil, continue to hinder the process of national reconciliation.
In this scenario, the Catholic Church is working hard to promote peace, harmony and reconciliation, especially through Caritas Sri Lanka, and the Conference of Major Superiors in Sri Lanka.
"The Church's efforts have contributed to greatly improving relations between the two communities", highlights Fr. Edmond Thilakarathna, spokesman for the Church in Sri Lanka, to Fides. The Catholic Church in Sri Lanka has baptized both those who belong to the Sinhalese community and the Tamil communities. That is why "it helps promote harmony, peace, reconciliation and brotherhood in a pluralistic society", he points out.
The National Commission for Justice, Peace and Human Development of the Bishops' Conference of Sri Lanka has launched numerous innovative initiatives to contribute to reconciliation. The apostolate as a whole, which includes activities in the fields of education, health, social development and other pastoral activities, is oriented towards the meeting between the two communities, to heal the wounds of the past and promote friendship, mutual trust and reconciliation.
Sri Lanka is a multi-ethnic country with 22 million inhabitants, mostly Buddhists, but includes Christian, Muslim and Hindu minorities. Muslims represent almost 10% of the population; Christians 7.4% (6.1% Catholics and 1.3% Protestants). (SD-PA) (Agenzia Fides, 20/5/2019)

AMERICA/EL SALVADOR - The Archbishop of San Salvador: "No law must cover up crimes against humanity!"

AFRICA/NIGERIA - Explosion on the border with Cameroon causes 30 deaths

ASIA/PHILIPPINES - Terrorist violence on Christmas eve: attack in front of the Cathedral