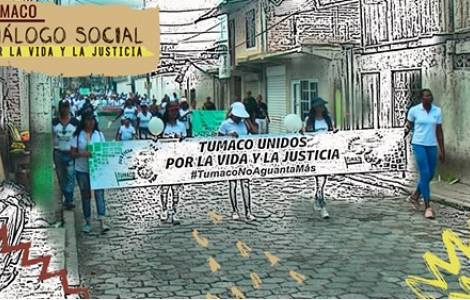 AMERICA/COLOMBIA - Tumaco Project: a people that, despite the abandonment, dreams of a better future
Tumaco (Agenzia Fides) - The "Tumaco Project: Social Dialogue for Life and Justice" continues, proposed by the Social Pastoral Caritas Colombia, which together with some local bodies from the area of Tumaco is working to restore the social fabric in the community.
Fides received from the Bishop’s Conference of Colombia some updates on the project, led by Mgr. Orlando Olave Villanoba, Bishop of the Diocese of Tumaco, who continues to engage the population for social and economic development.
Between January 2017 and February 2018, Tumaco's daily bread was: selective homicides, extortion, threatening letters, incidents caused and landmine accidents. Causes that caused the forced displacement of part of the population. "Terror rules in this land", said Mgr. Orlando Olave Villanoba, recounting the terrible situation.
"However this region of the country has in its essence a very great human and natural wealth, gifts that allow us to think that it is possible to build a different story. With this premise, the people of Tumaco, (a year ago) tired of the anxieties that violence generates in its multiple forms and accompanied by the Catholic Church and the institutions of the region, decided to say: "Enough! Tumaco can't take it anymore": this is what we read in the presentation of the project that now reproposes to create awareness throughout Colombia, or in the words of Mgr. Orlando "to look at Tumaco with other eyes, where there are people who have hope, because there is a second chance".
The Bishop points out what the area needs today in particular: security, healthcare, economic development, public education, infrastructure, attention towards young people. At the same time it informs that the various committees are already at work: the education table, the infrastructure table, as well as the "Unidos por Tumaco" Committee, which by welcoming professionals is giving the necessary impetus to reactivate the economy of the port, asphalting works on provincial roads and other communication routes.
"A development in this sense will have to reduce the time of transport of goods, will have to give a boost to trade and will allow to increase tourism", is what is read in the note sent to Fides. Many of these things depend on the security committee, which collaborates with the justice apparatus of the region, because it is necessary to restore trust towards the institutions, controlling and denouncing the group of criminals who try to threaten the perpetrators and provoke violence.
Unfortunately this project is being carried out while both human rights leaders and former FARC members who signed the peace agreement continue to be killed in the country.
Perhaps from Tumaco the message expressed on several occasions by Father Arnulfo Mina, a priest of Tumaco, who the people wanted as mayor, could reach the whole country: "We must not look at each other as an enemy, but we must seek reconciliation. We must work with young people to create awareness who are the ones who bring peace to families and to society. This is the story of a people that, despite abandonment, dreams of a better future". (CE) (Agenzia Fides, 17/05/2019)

AMERICA/ARGENTINA - Priest found dead in his church in Tucumán

ASIA/MALAYSIA - Archbishop of Kuala Lumpur to the faithful: "Stay safe and be holy"