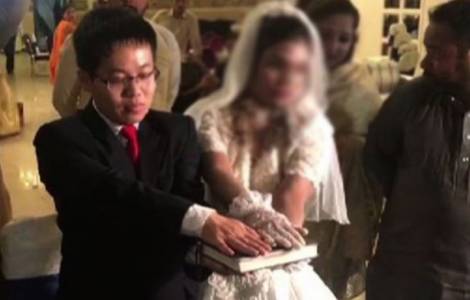 2020-06-20
Pakistan: the Commission for minorities and respect for human rights

Islamabad (Agenzia Fides) - "Young Pakistani women were enticed to marry Chinese men on the promise of a better life, but these young women and their families are not at all aware that they can be deceived and trapped in fraudulent marriages. We call on the government of Pakistan to take serious action against the culprits of this modern trafficking in human beings": this is the appeal launched through Agenzia Fides by Bishop Samson Shukardin OFM, president of the Bishop’s Commission for life and the family in Pakistan.
The Bishop, who is at the head the diocese of Hyderabad, says: "It is urgent to make people aware of this phenomenon: unregistered matrimonial offices and false Christian priests, self-proclaimed as such, are involved in this illicit traffic. These criminals ruin the lives of women and Pakistani families, in order to gain profit from them".
The question of marriages between Chinese men and Pakistani women made headlines in Pakistan in October 2018, reported by the human rights activist Saleem Iqbal. Speaking with Fides, Saleem Iqbal reported: "I was surprised to see in various parts of the Punjab province that Christian girls were married to Chinese men, who paid the family, marriage, the Priest very well. After the marriage these girls are brought to China, where they are often mistreated or sold as sex slaves, if not for organ trafficking. Thus unscrupulous men earn much more than they spent in Pakistan for marriages". According to the activist, in the last two years, starting from November 2017, over 700 such marriages have been organized.
In the last two weeks FIA (Federal Investigation Agency) has raided several places in the Punjab province in Pakistan, arresting about twenty Chinese men. Of these, 11 Chinese citizens were held and charged with false marriages. FIA deputy director in Lahore, Jamil Ahmed Khan Meo, said he had "launched a campaign in Punjab to eradicate criminal organizations dedicated to organizing false marriages between Chinese men and Pakistani women with the help of local facilitators".
Fr. Morris Jalal OFM Cap, director of Lahore Catholic TV, in order to raise awareness among the faithful and families on this issue, is conducting a campaign entitled: "Don't sell your daughter", which is spreading rapidly in the Archdiocese of Lahore. Speaking with Fides, Fr. Morris Jalal states: "We intend to save the lives of young women in Pakistan, Christians and Muslims. We must act to protect ourselves from gangs that organize such criminal activities". Fr. Morris Jalal confirms the presence of "self-taught Priests" who celebrate such marriages, specifying that "no Catholic priest or Pastors of the Church of Pakistan (the Anglican Communion, ed) celebrate these marriages", which take place in small "Christian halls" unrecognized, which dishonor faith in Christ and the sacrament of marriage". Fr. Morris calls for "strict action against the false Pastors who celebrate these marriages" and hopes for "greater government attention". Father Bonnie Mendes, an elderly priest from the diocese of Faisalabad, expresses "regret to see that some Pakistani families are attracted by marriages with Chinese men, seeing in this the solution of their economic problems".
In Pakistan, "arranged marriage", organized by the family for their children, is a practice that belongs to the local culture and is widely spread. (AG) (Agenzia Fides, 16/5/2019)

ASIA/SINGAPORE - Catholic marriage is celebrated only "in person" and not through online platforms, in times of pandemic

AFRICA/EGYPT - Lockdown due to Covid-19, Coptic Patriarch Tawadros authorizes the celebration of weddings

AFRICA/NIGERIA - "Rape is repulsive, reprehensible and dehumanizing" says Mgr. Kaigama in the face of the increase in sexual crimes

AMERICA/PERU- Families and homeless people of Cuzco receive help from the Church, while the cold weather aggravates the situation due to the pandemic