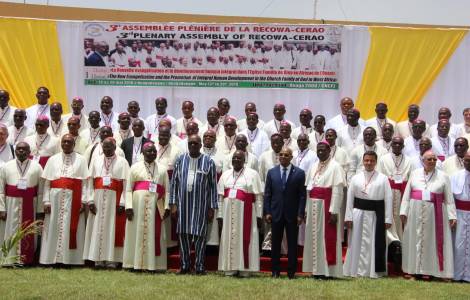 Ouagadougou (Agenzia Fides) - "The Holy See is grateful for the many commendable common initiatives you have undertaken and continue to pursue for the promotion of holistic evangelization in the West African Region", said Archbishop Protase Rugambwa, Secretary of the Congregation for the Evangelization of Peoples (CEP), speaking during the Third Plenary Assembly of the Bishops of CERAO/RECOWA (see Fides 13/5/2019), in West Africa. During the opening ceremony, in the presence of the Head of the Burkinabé State, the Prime Minister and various civil and religious authorities, Mgr. Protase Rugambwa brought participants a message from Cardinal Fernando Filoni, Prefect of the CEP.
Mgr. Rugambwa’s speech, sent to Agenzia Fides, is based on the theme of the meeting "The new evangelization and the promotion of integral human development in the Church, Family of God in West Africa".
"The Church, family of God in West Africa, presents some elements of hope, but also of concern for us Shepherds called by God" underlines the Secretary of CEP. "Vocations to the priestly and religious life increase - he points out - while the presence of different associations and lay movements of apostolate and prayers grow. The development of the missionary spirit towards the sister Churches of the same nation, as well as towards the neighboring nations, and towards the West is also observed. The Church is lively and active in bearing witness to the Christian faith. It is esteemed for its closeness to the people, especially the poorest and for its social commitment in favor of the needy without distinction".
However, it is clear from the text, "there are difficulties both on a civil and religious level in making the mission of the Church complicated: among these, the absence of peace and security, the lack of democracy and development; poverty, social discrimination, tribalism, ethnicity, religious fundamentalism, terrorism, the violation of human rights. On a religious level, religious syncretism, the return to traditional beliefs, to witchcraft; apostasy in favor of sects or other religions, hold back the path of faith".
"On the occasion of the 2nd Plenary Assembly, held in Accra in 2016 - remembers Mgr. Rugambwa - reconciliation, development and family were identified as particular challenges for evangelization in West Africa today. Now we see the importance of adding the promotion of integral human development, because it has a close link with the work of evangelization and social promotion. We cannot be indifferent to injustices, to the robbery of so many riches on behalf of a neo-colonialism of private and powerful Western and Eastern economic groups, while thousands of our children try to escape poverty and war".
The text continues: “Evangelization is confused with the very mission of the Church in the world, as herald of the mystery of the person of the dead and risen Christ and now present among us. It is the vocation of the Church itself and indicates, not only the first announcement to those who do not believe, but the entire ecclesial activity, both in its religious-sacramental aspect and in that of the announcement of human liberation. Evangelization is above all the way of being of the Church".
"Among the challenges we face is the integral human promotion", the Archbishop stresses, noting that "human evangelization and promotion do not oppose one another but are complementary and converge towards the same goal: the salvation of man".
"In the context of RECOWA, evangelization, new in its ardor and zeal, will tend to build the Church as a family, excluding all ethnocentrism and excessive particularism, seeking instead to promote reconciliation and true communion. Your local Churches - explains Mgr. Rugambwa - must unite evangelization and humanization, faith and social action, worship and concrete commitment. This task, I repeat, must not be reserved for the ecclesial hierarchy alone, for bishops and priests, but for all the baptized".
The Cep Secretary then highlighted the need, within the Church in West Africa, for well-prepared Christian leaders, determined to work in various sectors of social and pastoral life, to carry out the work of evangelization in West Africa. (AP) (Agenzia Fides, 15/5/2019)