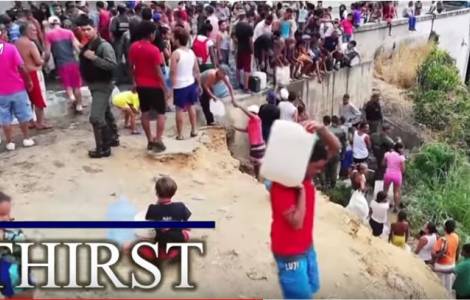 2020-01-09
The Assembly of Bishops examines the ecclesial and socio-political reality; call for respect for the National Assembly

2019-12-21
Christmas, an opportunity to "rekindle hope in a country that suffers"

2019-07-12
The Bishops: "Venezuela cries out for a change of direction, a return to the constitution"

Caracas (Agenzia Fides) - "In the difficult situations that our country is experiencing, with the high risk that the citizens have experienced in recent years, the Venezuelan Episcopate has remained in defense of the people that suffer. For this reason voices have been raised to denounce the injustices that, day after day, damage the entire nation and to reject the wave of violence that has been unleashed among the population": with these words of introduction, the Bishop’s Conference of Venezuela ( CEV) has sent Fides a video describing what the population of this country is experiencing, namely the harsh repression against all those who disagree with the government.
Still referring to the Bishops, the text recalls what they have done "through their actions, communiques, exhortations and pastoral letters that accompany, encourage and give hope to citizens, the faithful and all men and women of good will, uniting efforts to seek a peaceful solution to existing conflicts". It then highlights: "Venezuela! Live and walk with Jesus Christ, Lord of history!"
The reality that the video images present is very strong, sad and hard. People who look for something to eat among the rubbish, violence against young people protesting in the street, the solidarity of those who, without having anything, can collaborate with popular canteens to share a plate of food or assist the elderly and the abandoned. The image of cities paralyzed by the lack of electricity, transport and security is dramatic. The increasingly fragile economy weighs on those who always have less or nothing. Scenes of life and situations that have never been seen are reported: people who carry water cans with difficulty to get something to drink at home, hospitals without electricity in which they try to save lives by fighting against the lack of means. Some seconds of the video are dedicated to Venezuelan emigrants, almost forced to look abroad for a place to work and feed their family.
CEV has made this video to show the world how the people of Venezuela are living, since they cannot publish texts due to the impossibility of accessing their own website. The video concludes with the appeal of the Bishops not to respond with violence to the constant provocations of the government.
Meanwhile, the Permanent Council of the Organization of American States (OSA) approved yesterday (14/05/2019) a resolution rejecting the accusation of "violating the parliamentary immunity of members of the National Assembly of Venezuela". In this document, approved by consensus, the arrest of the first vice-president of the National Assembly, Edgar Zambrano is also condemned, and asks for the "immediate release". "The political situation in Venezuela was a cause of continuing concern by the OAS, which issued statements defending the rule of law, stressing the duty to respect democratic order and human rights, and to guarantee due process". Finally, the document calls for "the end of the persecution and harassment of parliamentary representatives unjustly brought to trial" and calls for "guarantees for the protection of personal physical safety and their families". (CE) (Agenzia Fides, 15/5/2019)

AMERICA/NICARAGUA - Hate, blood and death: a heartfelt SOS to the international community