AMERICA/BRAZIL - The president of CIMI: "the Amazon is a land disputed on several fronts" 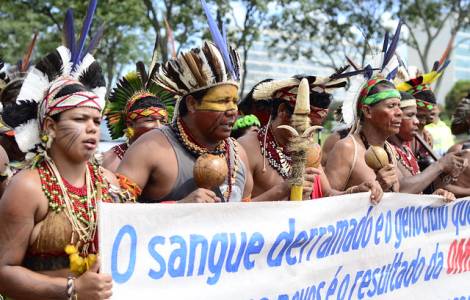 2020-01-15
First missionary experience of the diocese of Floresta: we want to show the missionary face of the Church

2019-12-13
Bishops: the right to freedom of expression does not cancel respect for people and their values

2019-12-03
Local teams, advocacy, networking: the priorities of the Pastoral Care Service for Migrants

2019-11-06
CIMI: the natives can no longer move safely in their territories

2019-10-29
Bishops on beach pollution: there is no future for humanity without respect for the common home

Aparecida (Agenzia Fides) - "Probably, the original peoples of the Amazon have never been as threatened in their territories as they are now; the Amazon is a land disputed on several fronts": says the President of the Indegenous Missionary Council (Cimi), Mgr. Roque Paloschi, Metropolitan Archbishop of Porto Velho, speaking on 7 May at the plenary session of the 57th General Assembly of the National Bishops' Conference of Brazil (CNBB), which takes place from 1 to 10 May in Aparecida, near San Paolo (see Fides 8/05/2019).
Mgr. Roque structured his speech based on the declarations and complaints of the indigenous people presented to the United Nations, the National Congress, the organization of indigenous peoples and the Free Land Camp (ATL) and the press. The intention was to show that "the cry of the indigenous people for life and justice also comes directly from the mouths and hearts of its leaders".
On the basis of this report, the president of Cimi underlined the importance of the Amazon Synod for the construction of "new paths" for the Church, according to what he called "the categorical imperatives" of Pope Francis, presented in Puerto Maldonado, in Peru, on 19 January 2018, when the Pope spoke to the representatives of the peoples and Bishops of the Amazon.
From the long speech of the Archbishop, sent to Fides, we report some significant data. A few days ago Free Land Camp (ATL) convened a meeting to take stock of the situation in which 4,000 leaders participated, representing some 200 indigenous peoples from all regions of Brazil. Among the issues dealt with the leaders, there was the issue of the participation of indigenous peoples and organizations in the discussion, formulation and monitoring of public policies that concern them, specifically with the decree 9759/19 published by the government of Bolsonaro. Other examples of participation such as the National Council for Indigenous Policy (CNPI) must also be mentioned.
The report also highlights the various significant public interventions of some representatives of indigenous peoples, such as that during the Permanent Forum of Indigenous Peoples at the UN, on April 25th, of Erileide Guarani Kaiowá, of Mato Grosso do Sul, or even that of the leader Kretã Kaingang, of the state of Paraná, in the Federal Senate, or that of Cacique Marcos Xukuru, of Pernambuco. All interventions were aimed at defending the land of indigenous peoples.
After recalling the Pope's trip to the Amazon, the report proposes concluding reflections: "After half a millennium of ecclesial presence in the Amazon, pastoral and missionary work failed to build a local Catholic Church. Churches based on proselytism, evangelicals and Pentecostals have become hegemonic in more than half of the Amazon communities".
"Pope John XXIII opened the windows of the Church with Vatican II. Pope Francis opened the door to the 'Church that goes forth', following the Master, who is 'the way, the truth and the life'. May the God of life and Our Lady Aparecida help us to see the affliction, to hear the cry, to get closer and closer to the native peoples of our country, to know them better, to learn from them and to help them defend their lives, so that they can live in their territories, full of life and future". (CE) (Agenzia Fides, 10/05/2019)

AMERICA/PARAGUAY - Assembly of Bishops: Youth Triennium and Year of the Word of God, for a Church in missionary outreach

VATICAN - The Pope opens the Synod for the Amazon: "do not extinguish the fire of mission"