AMERICA/COLOMBIA - The Nuncio: "This extreme violence of eliminating the adversary cannot continue" 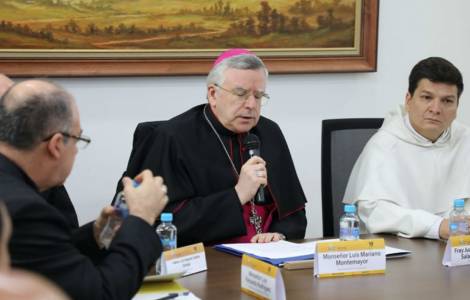 Bogotà (Agenzia Fides) - "We must take the theme of peace seriously, because it is not optional. Colombia cannot continue in this extreme violence of the elimination of the adversary and of those who think differently, it is essential to work for an inclusive mentality. We either all save ourselves or we all sink": the concern was expressed by the Apostolic Nuncio in Colombia, Archbishop Luis Mariano Montemayor, during his speech at the IX meeting of the "Red de Universidades Católicas de Colombia", on May 6 .
According to information sent to Fides by the Colombian Bishops' Conference, the Archbishop underlined the dramatic situation following the frequent threats and murders of social leaders in the country. The President of Colombia, Ivan Duque, has called the situation "serious" and announced in recent days the creation of a special commission of judges to clarify the killers of municipal and human rights leaders that occurred in different areas during the last year by illegal groups. Such criminal actions constitute the greatest obstacle to the peace process and a real general danger to peace in the country.
Cinep, social research center of the Jesuit community, registered 2,252 victims of human rights violation in 2018, of whom 1,151 people were threatened with death, 304 suffered physical injuries, 49 attacks, 22 disappeared and 3 sexually abused, in addition to the murders. According to the study, social leaders are killed by strangers, who do not identify themselves, by hooded people.
Mgr. Montemayor stressed that the question of peace cannot leave Colombians or the international community indifferent, given the increase in organized and criminal forces "that are opposed to the cessation of violence in the country and that must be fought effectively". It is certainly the task of the State to protect citizens, but the Archbishop has also asked civil society to help safeguard the lives of social leaders.
Celebrating the second "Day of prayer and reflection on reconciliation in the country", on May 3, the President of the Colombian Bishops' Conference, Mgr. Oscar Urbina Ortega, emphasized: "Jesus, whose Easter we celebrate, accompanies and encourages us, especially the victims of the conflict and of all the violence, so that with forgiveness they can break the cycle of violence that generates even more violence, hatred that sows the seeds of fear and an even greater hatred ... reconciliation is possible thanks to the strength that the Crucified instills, who now lives, in order to forgive, love and dream with hope the desired peace for Colombia". (SL) (Agenzia Fides, 10/5/2019)