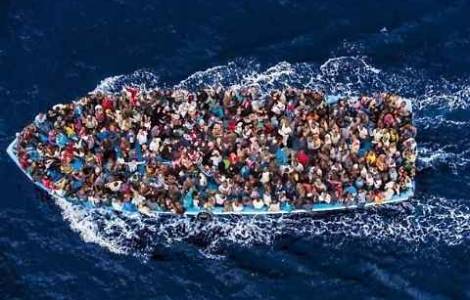 Abuja (Agenzia Fides) - "If you live in a country where young people tell you that it is better to live elsewhere, this is the sign of the failure of an entire leadership", accuses Cardinal John Olorunfemi Onaiyekan, Archbishop of Abuja, capital of Nigeria, on the eve of the meeting of local bishops dedicated entirely to the issue of migration, which opened yesterday, 7 May.
The Cardinal openly accused the Nigerian authorities of creating the conditions to ensure that more and more young people are driven to seek the path of migration. "if I were the president of a Country in which young people continue to make such statements, I would not hesitate to resign. I remember well when as a child at school, decades ago, I loved Nigeria and openly declared it, because I could count on a government that took care of me, and I had promises for the future ahead of me. Today's situation is exactly the opposite".
"The authorities should make Nigeria the home of Nigerians and the same goes for other African nations. These days, you hear some young Nigerians insisting that the pastures are greener elsewhere even when it is obviously not", the Cardinal remarked, referring to the scourge of trafficking of Nigerian girls, working as in prostitutes in Europe, and especially in Italy.
In this regard, the Cardinal said: "I am ashamed when I walk the streets of Rome, Milan or Naples and see the daughters of this country for sale on the streets. I stop and even greet some of them, you cannot even engage them in conversation because they were brought out of the village illiterates. All they learn and all they know on the streets of Italy is what they need for this business". "If you are an illegal migrant, you have no right wherever you are; you are likely to be manipulated, exploited", warned Cardinal Onaiyekan.
According to the Pan-African research network Afrobarometer, 35 percent of Nigerians want to leave the country, 11 percent say they think seriously about it. According to the survey, 75% of those Nigerians who want to emigrate do so for economic reasons: unemployment, escape from poverty and the search for better opportunities. The research found that it is the more educated young people who want to emigrate. About 44 percent of Nigerians with a degree would like to leave the country, while according to another survey 80 percent of doctors want to move abroad.
According to Cardinal Onaiyekan, to address this situation, "the government should develop a policy that will attract investors to Nigeria and generate employment. Those who want to be self-employed should have grants from the government to own their businesses". (L.M.) (Agenzia Fides, 8/5/2019)

AFRICA/IVORY COAST - Joint appeal of African and European Bishops: "Human trafficking and brain drain from Africa are being fought"