AMERICA/MEXICO - It is a humanitarian crisis: thousands of people have gone days without eating and sleep in the streets 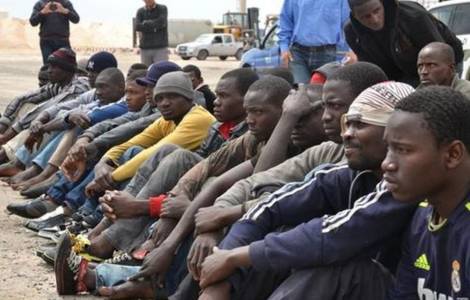 Tapachula (Agenzia Fides) - The situation of migrants in Mexico is getting worse by the day. On the northern border, with the United States, the increase in migrants is creating a logistical crisis in the attempt to welcome them, while in the south of Mexico the situation is even more dramatic, due to the presence of groups of people from Asian countries in search of means of subsistence to attempt the journey towards the north.
A few hours ago, a US appeals court ruling was made public which stated that the Trump administration can force asylum seekers to wait in Mexico. As a result, Mexican municipalities on the northern border will have to welcome all Central American asylum seekers in the United States until they are summoned by the border court, which can happen after a few months if everything goes well and quickly.
But the situation in the south presents a "real humanitarian crisis", in the words of Mgr. Alfonso G. Miranda Guardiola, Auxiliary Bishop of Monterrey and Secretary of the Mexican Bishops’ Conference (CEM), commenting on the CEM statement published yesterday on the terrible reality in Chiapas : "At the door to the southern border, there are thousands of our brothers, persons who have gone days without eating and sleep in the streets. There are children, elderly people, ill people and some pregnant women close to going into labor!"
In the statement, sent to Fides, we read: "We are concerned about the situation on the southern border, specifically what is being experienced in the city of Tapachula, Chiapas. The immense number of migrants has exceeded the assistance of the church and actions of the government. Mexican immigration detention centers in Tapachula are saturated, which do not allow for humanitarian attention, forcing migrants to roam the city seeking help".
According to Archbishop Miranda Guardiola in Huixtla (always in Chiapas) there are many migrants that come from Congo, Cameroon, Haiti, Sri Lanka, Bangladesh and Angola. "As a Church, our occupation today has become a concern. Together with other churches and civil society groups, we have participated and at the same time collaborated with our authorities for the humanitarian emergency that our country is experiencing, faced with the manifested migration phenomenon in the caravans that pass through and continue to move in our nation".
"We Mexicans have always been characterized by joy, by solidarity, by hospitality - the text continues -. However, given the flow of caravans of migrants, some have assumed attitudes of rejection, indifference, xenophobia, discrimination and racism. "We have asked for the intervention of the national Caritas to coordinate the help existing in our country, at the same time we motivate the different dioceses of our country, so that they solicit among our parishioners an extra effort of generosity in favor of our brothers".
Finally, the document invites the federal government to draw up an Emergency Plan in this regard, especially for the city of Tapachula. "We urge you to respond adequately to this moment of crisis in which our country has the opportunity to show its true level of humanity", concludes the text, signed by the president of the CEM together with the Bishops responsible for the Commission for human mobility, and by Mgr. Jaime Calderón Calderón, Bishop of Tapachula. (CE) (Agenzia Fides, 8/5/2019)