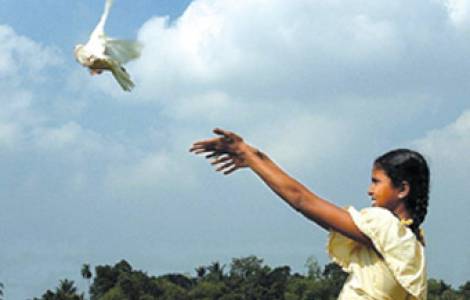 Colombo (Agenzia Fides) - We must not let "hatred triumph and must not allow the Easter violence to become an opportunity to polarize society and divide the nation": this is the new appeal launched by Cardinal Malcolm Ranjith, Archbishop of Colombo who, in a note sent to Agenzia Fides, urges all citizens to remain calm and maintain the supreme good of peace. The Church in Sri Lanka is worried after the recent incidents of violence recorded in Negombo: hundreds of security agents entered the city to enforce the curfew after dozens of shops, houses and vehicles belonging to Muslims were attacked. The church of San Sebastiano in the city of Negombo, 40 kilometers north of the capital Colombo, was one of three churches and three hotels hit by suicide bombers on April 21st.
"I appeal to all Christian brothers and sisters, and other religions, so that they do not hurt even a single Muslim because they are our brothers, because they are part of our society", says Cardinal Ranjith, who calls for "creating a spirit of understanding and good relations between all Sri Lankan communities", as he also reiterated in a video message broadcast on all the TV channels of the nation, urging Christians, Buddhists and Muslims to show moderation and tolerance.
The Cardinal visited Negombo, met with Muslim leaders in a mosque and "asked the government to protect security" in the city where "there is a strong Catholic community", pointed out the spokesman of the Diocese of Colombo, Fr. Edmund Tilakaratne.
Negombo suffered the highest number of victims in the Easter Sunday attacks that were claimed by the "Islamic State". The bomb in San Sebastian killed more than 100 Catholic faithful.
Meanwhile, the state of emergency continues in the country and security measures remain high throughout the nation, while state schools resumed classes on Monday 6 May. Even Catholic schools in Colombo and the province remained closed for a week.
A forum of priests, religious, civil society groups and members of other religious communities wrote an open letter to the President, the Prime Minister, members of the Council of Ministers and members of Parliament regarding the situation in Sri Lanka. The text of the letter, sent to Fides, states: "Our common goal was to advance the political, social, economic and cultural rights of the population by promoting peace, harmony and social justice for all. In the past we worked hard with all governments and will continue to do so today. We are shocked by the bloodbath in Sri Lanka. Our solidarity goes to the victims and their families and our beloved country. We urge the government to quickly identify the truth and to find the perpetrators and their allies".
Civil society in Sri Lanka offers assistance through its extensive networks of community organizations that are committed to promoting peace and national unity. These networks can share information and, given their widespread presence in the territory, help prevent community problems that may arise. (SD) (Agenzia Fides, 7/5/2019)