ASIA/INDONESIA - President of the Bishops' Conference: “No to corruption and violence, yes to clean politics” 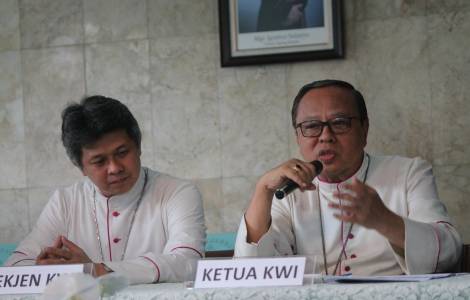 2020-06-10
Pandemic and Pancasila: the Charter of the five principles, the "guiding beacon" for care, cooperation and brotherhood

2020-06-03
Interreligious coexistence and solidarity: the songs of Catholics are viral on social media

2020-04-24
A "Non-migratory" Ramadan due to coronavirus: travelling and pilgrimages prohibited

Jakarta (Agenzia Fides) – “It is important to differentiate between clean politics, in the highest sense of the word, and electoral competition. In Indonesia healthy politics is overshadowed by pervasive corruption implicating politicians, officials, civil servants, and government bodies. With a lack of moral conscience, the public has lost faith in their leaders”, Agenzia Fides is told by Mons. Ignatius Suharyo, Archbishop of Jakarta and President of the Bishops' Conference of Indonesia, soon before the parliamentary elections to take place on 17 April, meanwhile in the mass media the debate is still heated between the opposing sides, at the peak of the election campaign.
“Clean politics – the Archbishop recounts- means a clean race and honest and a transparent administration of power that benefits all citizens. When bad practices, such as violence and corruption, become commonplace, a general moral crisis takes place. Citizens are no longer able to distinguish good from bad. Without a moral guide, people are unable to have a good social life”
“In this situation, the Church should encourage Catholics, fulfilled by the values of just politics, to participate in the government framework. Such action, the involvement of Catholics in politics should be pursued at present”, he revealed, taking note of the 151 Catholic candidates on the ballots. Politics can and should be revived by a sense of “healthy nationalism”, he explains, understanding the theme in a more “inclusive” sense, as national protection, rather than a nationalistic ideology that even attempts to take advantage of fanatic religion to gain power, adversely affecting religious minorities.
The nation, he explains, belongs to every citizen, all religions: Monsignor Suharyo mentions in regards to the “iconic missionary” of Jesuit Franciscus Georgius Josephus van Lith SJ of Holland (1863 – 1926), the first missionary of Indonesia, that lived in Java, in 1922 didn’t hesitate to support the Javanese in their conflict against the Dutch Government which had colonized the archipelago. With the same spirit, he recalls, Mons. Albertus Soegijapranata SJ, the first native Indonesian Priest, has been driving the Archdiocese of Semarang.
Meanwhile in Indonesia, the political climate is heating up and on the eve of the elections the former General Prabowo Subianto, opponent to the exiting President of Indonesia Joki Widodo, during a recent speech has openly invited the public to refuse the result of the voting (while the polls show him to be the unpopular candidate), calling for a uprising of the people in the aftermath of the elections. Appeal, this one, deemed dangerous and irresponsible by many observers, since it could lead to a violent uprising. (MH-PA) (Agenzia Fides 13/4/2019)

AFRICA/ZIMBABWE - The Covid-19 crisis aggravated by the strike of nurses, exacerbated by low wages and corruption