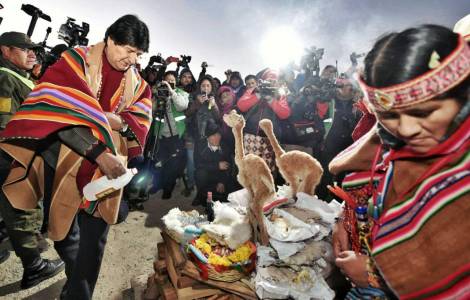 La Paz (Agenzia Fides) - Bolivia will have a law that intends to regularize the activity of evangelical groups and Aymara ten years after the approval of the Constitution, which guarantees full religious freedom and worship in the country. According to the note sent to Fides, the rule approved by the Legislative Assembly, now awaiting the signature of President Evo Morales, obliges the newly created evangelical churches and the "amautas" (Aymara priests) who profess the Andean cults, to pay the taxes and to register according to labor law. At the same time it prohibits the distribution of resources "directly or indirectly among its members".
The law was approved despite the Constitution guaranteeing freedom of worship and spiritual beliefs. The main reason, according to Lino Cárdenas, President of the Constitutional Committee of the Chamber of Deputies, is that the country now has 398 registered churches. "Churches have the full right to profess the faith but they also have obligations before the State, which must regulate them to ensure that the population is not deceived", Cardenas explained to the press. He added that in this way we try to protect people from economic deceptions. Then he added: the churches will pay an established tax for non-profit institutions and the "amautas" will have to be registered and follow a regulation.
According to the data collected by Fides, in Bolivia the practices of the "amautas" or spiritual guides of Aymara culture are deeply rooted, which proliferated with the arrival of Morales in power, in 2006. It is true that Morales had promoted the practices and the activities of the Andean traditions, but it is also true that numerous false spiritual guides have spread only for the purpose of fraud.
The Catholic Church has positively commented on the law under discussion, highlighting that it is a step forward for the national community (see Fides, 27/03/2019). "Important aspects have been clarified, such as the legal personality, the fiscal problem, among others", said the general secretary of the Bolivian Bishops' Conference, Mgr. Aurelio Pesoa Ribera, O.F.M. Auxiliary Bishop of La Paz, to the local press. "As a Catholic Church we present our economic relations to the State every year", added Mgr. Pesoa.
According to the 2001 census, Bolivia had about 10 million inhabitants at the time, of whom 78% declared themselves Catholic, 16% Protestant or evangelical, 3% declared they professed other religions of Christian origin and 2.5 % did not practice any religion. The 2012 census did not ask for belief or religion, but the evangelical groups said they numbered about four million faithful. (CE) (Agenzia Fides, 04/04/2019)