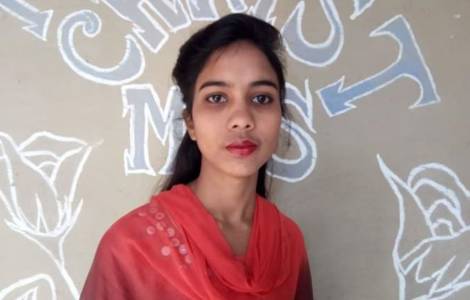 2020-05-12
A Bishop: the coronavirus teaches us the lesson of unity and the common good

2020-03-27
Cardinal D'Rozario: "Let us collaborate with the government to overcome the coronavirus pandemic"

2020-03-17
Prayer and awareness on the coronavirus, while the nation celebrates the "Father of the fatherland"

Natore (Agenzia Fides) – There is concern in the Catholic community in Bangladesh due to the abduction of a young woman, Teresa Sheuly Rozario, 19, who has ended up in the hands of human traffickers. As Agenzia Fides learns, woman Ranjita Das and her three-year-old daughter, rescued on March 27, were also kidnapped. But Teresa Sheuly Rozario disappeared on March 22 and there has been no news of her since then. They are all members of the Catholic church of Bonpara in Natore, in the diocese of Rajshahi, in northern Bangladesh.
Nineteen-year-old Teresa was actively involved in the local Church. Her father Pakrashus Rozario tells Fides: "Our daughter was going to church. She was a brilliant student and dreamed of a good job. She disappeared, was kidnapped and we are very worried". Pakrashus Rozario and his wife are looking for her everywhere: "My wife is getting sick, she is not eating, she is crying and she is praying to Jesus Christ and the Virgin Mary". The parents filed a complaint with police in Natore in northern Bangladesh. The police believe that human traffickers who target young women are involved. The parish asks the police to do everything possible to find Teresa Sheuly Rozario. Mahmad Rafiq, inspector of the police station in Natore, told Fides: "We are looking for Hasan and other traffickers. We think that there is a band of human traffickers in the area".
The testimony of Ranjita Das, 28 years old, proves it: on March 5 she was returning home from school, with her three-year-old daughter. Two women with the burqa stopped her and told her that she could be the recipient of a government-funded house-building plan. They offered her food, but the woman lost consciousness: when she woke up she found herself in an unknown place, inside a locked room, controlled by the Muslim Athur Rahman Hasan. The man in the past had often presented himself to the village, falsely declaring himself as a member of the local government willing to help needy families. Hasan said he wanted to marry Ranjita, who she refused. She remained a prisoner a few days. On the other hand, Amal, Ranjita's husband, asked the local police and church faithful for help. Ranjita managed to make a phone call to her sister, informing her of the kidnapping. On March 27, her older brother found her and saved her, while Hasan is wanted by the police. Ranjita’s family states. "We want exemplary punishment for traffickers".
Bangladesh is one of the areas of Asia where the phenomenon of human trafficking is strong. According to figures reported by the "Daily Star" newspaper, between February 2012 and June 2018, 4,152 cases of abductions due to human trafficking were recorded, but only 25 people were convicted.
A study by the Indian Border Security Force states that about 50,000 Bangladeshi girls are kidnapped and taken to India or taken through India every year. There are police reports of gangs of human traffickers in Libya and Iran who kidnap Bangladeshi women looking for work abroad and hold them hostage. Above all, poor and needy people become victims of human trafficking. (SC) (Agenzia Fides, 4/4/2019)

AFRICA - Religious women during the time of COVID-19: close to those who suffer