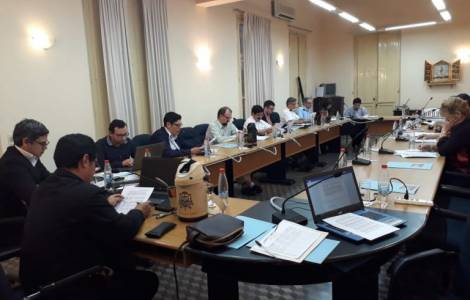 Ypacarai (Agenzia Fides) - "As a Church that goes forth, the lay faithful must be concerned and committed to all dimensions of contemporary reality: ecclesial, social, political, economic, cultural and environmental in the light of the Gospel": this reflection, taken from the Message of the first Continental Congress of the Laity, opened the National Meeting of the Laity of Paraguay, which took place, on March 23 and 24 in Ypacarai, in the Central department, about thirty kilometers from the capital Asuncion. According to information from the Bishops' Conference, which was sent to Agenzia Fides, the meeting was attended by lay representatives of the various ecclesiastical districts of the country, lay movements and organizations, accompanied by Mgr. Celestino Ocampo, Bishop responsible for the Pastoral Care of the Laity, by Mgr. Joaquín Robledo, Bishop of San Lorenzo and by Fr. Bonifacio Romero, councilor for the laity of the Archdiocese of Asuncion.
With the aim of training lay people to give a clear testimony of Christ in their environment and to offer effective participation in the construction of a more just, fraternal and united society, the initial reflection concerned the Apostolic Exhortation "Christifideles Laici", of St. John Paul II, on the vocation and mission of the laity in the Church and in the world. Juan Gabriel Sosa, young Latin American coordinator, therefore proposed some thought on the message of the Holy Father at the WYD in Panama, with speeches and testimonies of life of some Young people. The lines of action on the theme "Church that goes forth" were therefore defined: each representative of dioceses, movements and associations presented the commitments and concrete actions to be carried out in their own community in order "to produce good fruit".
During the meeting, some decisions were also communicated with regards to the 220th Plenary Assembly of the Paraguayan Bishops' Conference, which declared the "National Lay Day" to be celebrated on the solemnity of Christ the King, with the aim of promoting the identity, vocation, spirituality and the mission of the laity". (SL) (Agenzia Fides, 28/3/2019)

ASIA/KAZAKHSTAN - The Bishop of Almaty: it is time to promote the role of the laity in the Church