AFRICA/DJIBOUTI - The mission of Caritas: to be close to the poor 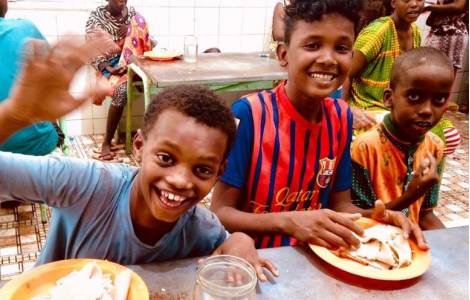 2021-01-27
The pandemic increases the vulnerability of street children: the Church offers hospitality

Djibouti (Agenzia Fides) - "Our mission is to be close to the poor. Whatever faith they profess and ethnicity they belong to. Whether they are immigrants or local citizens". Francesco Martialis, Director of Caritas Djibouti, describes the spirit with which the organization, that belongs to the Catholic Church, operates.
Djibouti is a Muslim country where the Catholic Church is not allowed to carry out evangelization, but is allowed to work in the social sphere. "Caritas has been operating in Djibouti since 1952", explains Martialis. "Everyone, from the authorities to individual citizens, knows that we are an emanation of the Catholic Church. But we can work freely with the people and for the people. A work that is appreciated and recognized".
Djibouti is a small State wedged between Eritrea, Ethiopia and Somalia. Former French colony, it has been independent since 1977. In these 42 years it has experienced strong tensions between the ethnic groups of Issa (60% of the population) and Afar (35%). Still no complete pacification has been achieved and in order to overcome this latent conflict the government is trying to play the unifying trump card of Islam. "The Islamic faith is a political trump card that the government uses to unify the nation", continues Martialis. "What worries us, however, is not this aspect, but the constant spread of fundamentalism spread by some nations of the Arabian Peninsula. This Islam is intolerant and totally foreign to the tolerant religious tradition of the Djiboutians. For centuries, Christians and Muslims have lived side by side without problems. These Saudi infiltrations harm both us Christians and local Muslims".
The Christians are, in reality, about five thousand: the majority are Catholics, then we have Lutherans and Pentecostals and Orthodox (Ethiopian Orthodox Church). Most Catholics are soldiers of the French and Italian bases and members of the United Nations mission in Djibouti. The local diocese, led by Italian bishop Mgr. Giorgio Bertin, counts on three priests and thirty sisters. "We - explains Martialis - despite being a religiously inspired organization, operate in a secular way. Obviously if we are asked where we draw our strength, we openly say that we are Christians. But this does not prevent us, rather it helps us, to work with all, especially with the poorest of the poor".
There are various projects. The main one deals with street children, potential victims of human trafficking. A thousand of them receive medical care, clothing, food, but also education (French, English, mathematics, art) and schooling. "Most of them are migrants (Oromo Ethiopians)", observes Martialis. "They live in terrible conditions. Many take drugs. They are violent. Girls prostitute themselves. We try to give them the affection they need and we try to reintegrate them into their families". Caritas helps the poorest migrants and Djiboutians also offering free medical care in the Catholic clinic and public hospitals. For years it has also launched a project to support the communities of the hinterland particularly affected by drought.
Two years ago, Caritas Djibouti tried to create a presence to help the peoples who had been badly affected by the war, but encountered serious difficulties. It is now considering a new mission in the Country, but in the meantime it is trying to help the Yemenis in Djibouti with a project that includes professional training, micro-credits and basic aid. "This - concludes Martialis - is our way to be close to the Djiboutians and migrants. A concrete help aimed at those in need. We work with an evangelical spirit in an Islamic land". (EC) (Agenzia Fides, 18/3/2019)