ASIA/INDIA - Official request of the Indian Bishops: postpone the date of the expected vote on Holy Thursday 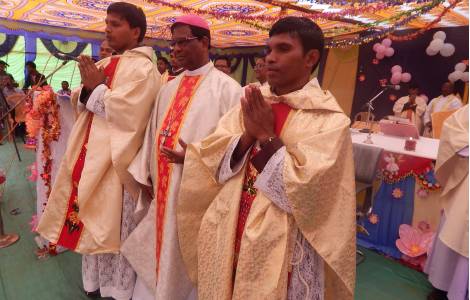 New Delhi (Agenzia Fides) - The Bishops' Conference of India has written to the Electoral Commission of India, a governmental body that manages the upcoming general elections, officially asking to change one of the dates of the vote which is scheduled for April 18 for the states of Assam, Bihar, Chhattisgarh, Jammu and Kashmir, Karnataka, Maharashtra, Manipur, Orissa, Puducherry, Tamil Nadu, Tripura, Uttar Pradesh and West Bengal. That day, coincides with Holy Thursday, an important observance for Christians.
The coincidence had already been noted by the Bishops of Tamil Nadu (see Fides 14/03/2019). Now, as Agenzia Fides learns, in a written communication to Sunil Arora, President of the Electoral Commission, Bishop Theodore Mascarenhas, Secretary General of the Episcopal Conference of India (CBCI) officially raises two key questions: "I wish to emphasize - we read in the text sent to Fides - that we are not writing only on the basis of religious sentiments, but rather in consideration of the logistical difficulties that could occur in view of the upcoming elections. We understand that April 18 (Holy Thursday) is not a public holiday, but most Christians take leave from work or carry out a reduced service to participate in the sacred worship".
As good citizens, the note explains, "Christians would like to render full service to the electoral commission and to the country in this important event. However, the date of the elections coincides with the liturgies of Holy Thursday and Christians could find it difficult to fulfill both the demands of worship and the electoral duties, especially those who are police officers or serving in the polls. Christians will continue to carry out their sacred duty to the country, but the Electoral Commission could make it easier for them to participate in the process, shifting the vote on another date”.
Mgr. Mascarenhas adds: "Historically, a large number of voting booths are located near our places of worship and in schools run by the Church, often annexed to our places of worship. Also given the needs of how to conduct elections, and of the special security needs, your office may also have difficulty conducting the elections. I am also sure that you do not want to take away the opportunity for millions of Christians to participate in their holy temple in liturgical celebrations in days that they consider most holy".
For this reason the Bishops call on the government to consider postponing the election date of 18 April 2019, ensuring "full cooperation and encouragement of the faithful to participate in the votes".
India has announced the various dates in which national elections will be held that will see almost 900 million voters cast their vote in nearly one million polling stations. The Electoral Commission has announced that the elections will be held in seven phases, according to the different states of the Federation: April 11th, April 18th, 23rd and 29th April and then on May 6th, 12th and 19th. The vote count is scheduled for 23 May.
Alongside the vote for the Federal Parliament, the votes will be held for four state assemblies, in Andhra Pradesh, Sikkim, Arunachal Pradesh and Orissa. (PSD) (Agenzia Fides, 16/3/2019)