OCEANIA/NEW ZEALAND - Massacre in the mosques, the local Church: "Horrible act. In society there is peaceful coexistence" 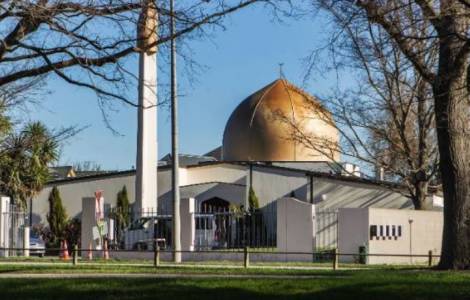 2021-01-04
Appointment of coadjutor archbishop of the metropolitan archdiocese of Wellington, New Zealand

2020-01-07
Appointment of the auxiliary Bishop of Auckland

2019-03-15
Massacre in the mosques, the local Church: "Horrible act. In society there is peaceful coexistence"

Christchurch (Agenzia Fides) - "It is a horrible act, to be strongly condemned. It is something really unexpected for our quiet community in Christchurch. We are shocked, like the whole nation. We express all our solidarity with the families affected and the Islamic community. Let us entrust to God the broken lives and suffering caused by the massacre of innocents": with these words delivered to Agenzia Fides, the Bishop Emeritus of Christchurch, Bishop John Basil Meeking expresses all the pain and shock for the massacre which took place today at two Christchurch mosques, where 600 thousand people live, including 70 thousand Catholics.
The killing was carried out with firearms by a commando of four people, led by the twenty-eight year-old Australian, Brenton Tarrant, inspired by anti-immigrant and anti-Islam sentiments. The attacks took place around 1.40pm local time and has left so far at least forty-nine people dead. New Zealand's premier Jacinta Arden immediately stated that "this is one of the darkest days in New Zealand. We are facing an unprecedented act of violence".
As Agenzia Fides learns, Mgr. Patrick James Dunn, Bishop of Auckland and President of the Episcopal Conference of New Zealand, sent a message to all the Catholic communities of the nation, asking to include a special prayer for the victims in all the holy masses that will be celebrated next Sunday 17 March.
The Director of the Pontifical Mission Societies in New Zealand, the Verbite, Fr. Bernardo Epiritu, comments in a conversation with Agenzia Fides: "We are shocked because our nation practices peaceful coexistence between different cultures and religions. Evidently some extreme-right groups carry seeds of Islamophobia, or of 'white supremacy'. But I can say that in society, among ordinary people, there are no anti-racist or anti-Muslim sentiments. The attack is an execrable act, completely unexpected, this is what hurts us. In our society there is currently a mixture of cultures and ethnicities, for immigration, a historical and current phenomenon. Even the Catholic Church is revitalizing herself thanks to the contribution of Catholic immigrants coming from Asian countries and also from South America. In general, the sense of acceptance towards refugees and immigrants is widespread, without discrimination on a religious basis. As a Catholic community we can contribute to promoting peace, tolerance, coexistence, so that the poisons of hatred and fear do not allow other innocent blood to flow". (PA) (Agenzia Fides, 15/03/2019)

AFRICA/DR CONGO - Islamist threat in Kivu and Mozambique: States in southern Africa should act together