AFRICA/NIGER - Lent in prayer for Father Maccalli, six months after his abduction 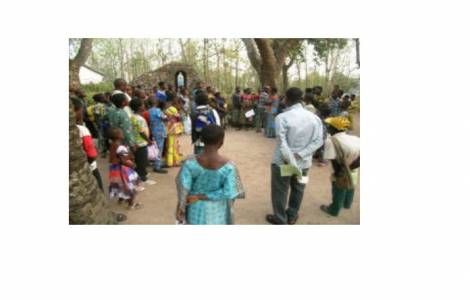 Niamey (Agenzia Fides) - "The more time passes, the more we must resist the temptation to resign ourselves and to soften our attention. In the diocese we want to continue to propose moments of prayer for the release of Fr. Pierluigi Maccalli (see Fides, 18/9/2018). We are happy that these moments are always welcomed with joy and that there is a good participation of the faithful": says to Agenzia Fides Fr. Vito Girotto, a priest of the Society for African Missions, a confrere of the missionary kidnapped in Niger six months ago.
"Our faithful are convinced that only God can obtain this release, and this is why we must pray with perseverance. In the Vicariate of Niamey we have the habit of organizing a Lenten pilgrimage, with the participation of Christians from all the nine parish communities. We gather in the large courtyard of the Catholic school, located near the Cathedral, and from there we leave for a journey of some kilometers, praying, singing, meditating. This year we will pray especially for Father Maccalli".
Lent in the diocese is deeply felt by the faithful, who fill the churches on Ash Wednesday, and every Friday for the Via Crucis. "This year - continues Fr. Vito - the pilgrimage will take place on Sunday 17 March with catechesis, adoration, the penitential celebration with confessions, the Via Crucis and the concluding Mass enlivened by young people, all for a very intense 12 hours of prayer and spiritual reflection".
"During Mass - explains Fr. Girotto - there will be a special moment of prayer for Fr. Pierluigi. Since his kidnapping prayers have continued for his release, in every Mass celebrated in the diocese".
On Tuesday, March 19, the feast of St. Joseph, in Niamey and in all the vicariates of the vast Nigerian diocese, an ecumenical prayer was scheduled: the various Christian churches and denominations present in the diocese will pray together for Fr. Perluigi. "The initiative, although started by the Catholics, was favorably welcomed by our Christian brothers of other confessions. We hope that there will be a large participation in this prayer. It will give a strong testimony of unity and collaboration to the whole country", he continues.
"In April - he concludes - we would like to plan a prayer together with the Muslims: we are confident that they will respond benevolently to our invitation. We are told that in many mosques Muslims have prayed for Fr. Pierluigi, and that they are not indifferent to his fate. In Makalondi, for example, they were very supportive towards us Catholics. We hope that the next Easter holidaysxx Father Pierluigi will be with us". (VG/AP) (Agenzia Fides, 11/3/2019)