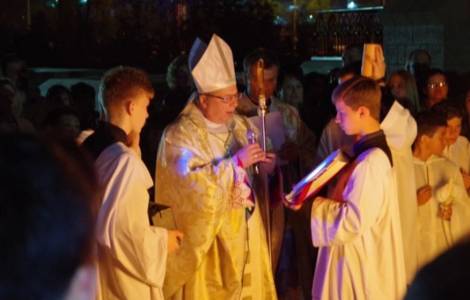 Tashkent (Agenzia Fides) - "If I were to take stock of the last 10 years, I would say that the Uzbek church has not grown in number but in the composition of people, because many have emigrated and at the same time new groups of faithful have arrived. But above all, the awareness of Catholics has changed: they are more mature and responsible. Ten years ago we had no lay faithful who put themselves at the service of the community. Today, however, they contribute to organizing the various pastoral activities, such as catechesis for children or spiritual exercises for adults". This is what the Apostolic Administrator of Uzbekistan, Polish Franciscan Fr. Jerzy Maculewicz, OFMConv tells Agenzia Fides.
"The whole nation - he notes - is experiencing a phase of growth. Since last February 1, for example, 45 states have received permission to enter Uzbekistan without a visa. This gives many the opportunity to come and visit us: we receive groups of pilgrims who, accompanied by priests, want to know the reality of our Church and get to know the local culture, says the Franciscan.
In this part of Central Asia there is an intense interreligious and intercultural dialogue, fostered by years of peaceful coexistence between different ethnic groups: "There are more than 100 ethnic communities, probably because Uzbekistan was the heart of the Silk Road and many passing by, decided to stay. People are used to being with people from other cultures and that is why there are no extremist turmoils. I've been living in this country for 14 years and I've never met anyone who could be considered aggressive. On the contrary, many people show interest in our faith".
In Uzbekistan, the Catholic faith is recognized as a "traditional religion", together with the Islamic, Orthodox, Lutheran, Armenian and Hebrew religion: "For this reason, Christianity is perceived as deeply rooted in the history of the country. This helps us, because we are known and respected, and the exponents of other religions have no problem participating in our initiatives".
A few days ago, a new priest came to lend his service to the parish of Samarkand, which until last month could only count on the presence of a non-priest religious. In total there are therefore 8 priests and 4 religious: "Since we are in a foreign country and we are few, we try to feel less alone by living 4 days a month all together in Tashkent. In this way we can pray, be together, talk…", explains Fr. Maculewicz.
Instead, the community of the faithful has little more than 700 Catholics active in the major cities, to which others are added, distributed in small towns: "There are few Uzbeks, most of the faithful are immigrants. We have all age groups, mainly young people and middle-aged people, who ask questions about their spiritual journey. Sometimes people contact us who discover that their ancestors were of Catholic origin and want to become part of our community and are welcomed", concludes the Franciscan. (LF) (Agenzia Fides, 8/3/2019)