AMERICA/ARGENTINA - Extraordinary Missionary Month: let us become aware that we are all missionaries "by nature" 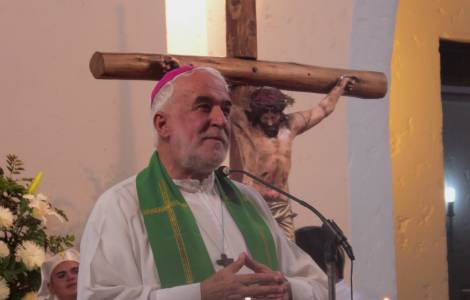 2021-10-15
"Let us renew our missionary and evangelizing ardor": the martyrs of Zenta will be beatified

2021-07-17
"The most excruciating poverty coexists with the most inconceivable wealth": Social Week 2021

Formosa (Agenzia Fides) - "Being a missionary is a vocation, a call and an election", says His Exc. Mgr. José Vicente Conejero Gallego to Agenzia Fides, who arrived as a missionary in the Argentine diocese of Formosa in 1976, of which he has been a Bishop since 1997. The Bishop emphasizes that "Jesus Christ is the envoy of the Father, the missionary par excellence, sent to carry out a mission. Jesus is sent to realize the salvation and reconciliation of men with God and the new covenant".
Mgr. Conejero continues: "after Jesus, Mary, in the text of the Visitation, after having said her yes to God and having Christ in her womb, is moved by the Holy Spirit to go and announce the mercy of God, the fulfillment of his promises, and to give an immediate help, as St. Ambrose says, to the elderly cousin Elizabeth, in this way brings the announcement both of the good news of the Lord and of the concrete service to the brother".
The Bishop of Formosa still emphasizes to Fides that "Paul is the missionary and the apostle par excellence, when he begins the Letter to the Romans, he says he is the servant of Jesus Christ, chosen and called to preach and proclaim the Good News". Starting from these testimonies, Mgr. José Vicente Conejero Gallego emphasizes that "to be a missionary is to be like Jesus, anointed and sent to proclaim the Good News of the Kingdom of God. Of course, united to the Church, who sends and carries out this mission through concrete people. In short, being a missionary is to be sent, chosen, summoned, to bring men the joy of the Good News of Jesus, loving them and serving them".
For the Bishop, the Extraordinary Missionary Month of October 2019 represents an opportunity to "encourage the whole Church, which by its very nature is missionary, as the decree Ad Gentes says". From this it emerges that "the fundamental objective of this Month is to sensitize the entire ecclesial community, the entire People of God, all the baptized, as the motto says, baptized and sent". Finally, Mgr. José Vicente Conejero Gallego hopes that "in the particular Churches, we can all become aware of being missionaries by nature, and therefore there is a greater missionary impulse throughout the Church to proclaim the Good News of the Kingdom of God and build the Church, in dialogue with cultures and peoples, so as to be able to progress in the construction of the only human family". (LMM) (Agenzia Fides, 26/2/2019)