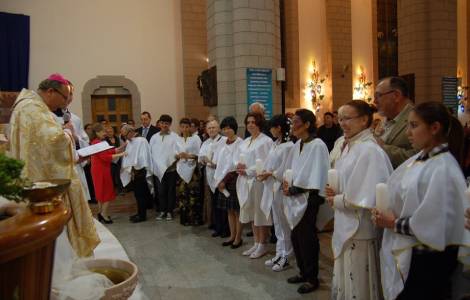 Vatican City (Agenzia Fides) - "We are here too, a small community of about 3.000 faithful in Central Asia". In the meeting of these days on the protection of minors in the Church, I was able to touch the beauty of collegiality and synodality with the universal Church. It was very touching to see that all of us, young and old churches, small and big, were given the opportunity to dialogue with the Pope and to seek together answers to the questions that the Church poses. We dealt with the issue of pedophilia, a serious problem that we can say has not touched Uzbekistan, but I cannot say that it does not concern us because, at that point, I could not say that we are a single Church. We also must pray, suffer together and participate in the resolution of these problems". This is what says to Agenzia Fides the Apostolic Administrator of Uzbekistan, Polish Franciscan Father Jerzy Maculewicz OFM Conv, who came to Rome to attend the meeting on the protection of minors in the Church and for the ad limina visit of the Bishops of Central Asia, from 25 February to Monday 4 March.
"Another good feeling and consolation which I experienced these days - he continues - is the awareness of having help, a support from the other Bishops, because I do not always know how to act in the different and complex situations that we live. I need to hear another person who lives my own difficulties, to know his opinion, to ask what he would do in my place. Thanks to this experience, I needed this kind of collegiality that can support my service in Uzbekistan", says Fr. Maculewicz.
Initially, the Franciscan notes, the meeting on the protection of minors in the Church should have involved only the presidents of the episcopal conferences: "We bishops of Uzbekistan, Tajikistan, Kyrgyzstan and Turkmenistan, therefore, should not have participated. But the Pope decided to give us this great gift and to invite even the single ordinary Bishops".
Currently, the Catholic Church in the former Soviet republics of Central Asia sees the presence of only the Episcopal Conference of Kazakhstan. The hope and desire expressed by the bishops present in Rome is that, in the times deemed possible by the Holy See, an expansion could be considered and formalized with the istitution of an Episcopal Conference of Kazakhstan and Central Asia, which would thus finally guarantee an official structure and formal support to the Churches of the four smaller countries of the area (Uzbekistan, Tajikistan, Kyrgyzstan and Turkmenistan), where Christians are a small flock, often entrusted to a few missionaries, priests and religious. (LF) (Agenzia Fides, 25/2/2019)