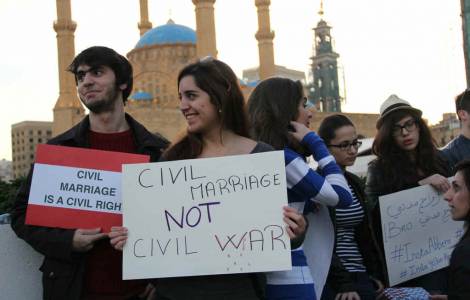 2020-11-13
Conflict in Nagorno Karabakh: solidarity from the Catholic Patriarchs in Lebanon towards "Armenian brothers and sisters, wounded in their dignity"

2020-10-14
Maronite Patriarch: Negotiations over sea borders do not represent "normalization" of bilateral relations with Israel

Beirut (Agenzia Fides) - The debate on civil marriage has stirred tensions in Lebanon after the newly appointed interior minister, Raya Hassan, reignited the issue for its recognition by religious authorities.
Current Prime Minister Hariri lent his support to the cause since 2013 when he said, “I personally would not want my daughter to get a civil marriage but I cannot oppose it, in my capacity as prime minister.”
However, several politicians, Druze leader Walid Junblatt and former president Amin Gemayel, have backed Ms Hassan’s proposal to reopen the confrontation on civil marriage. But several religious and political leaders have already expressed their opposition to the prospect of a legal recognition of civil marriage. Lebanon’s highest Sunni authority, Dar Al Fatwa, published a statement to express its “absolute rejection” of the idea saying that it contradicts Islamic law. Also Father Abdo Abou Kassem, the Catholic Church's spokesman, argued that an optional civil marriage is “wrong” and “confusing” and reaffirmed that on this point Lebanese Christians and Muslims are united, and that the Catholic Church does not support civil marriage because it contradicts the concept of the ‘sacrament of marriage. Similar considerations were expressed during a homily by the Maronite Archbishop of Beirut, Boulos Matar. And even some representatives of the Hezbollah Shiite party, like parliamentarian Ehab Hamadeh, rejected the hypothesis of the legalization of civil marriage as contrary to the legal criteria based on the Sharia. Along the same lines, the President of Parliament, the Shiite Nabih Berri, said there is no space for this campaign and that the matter was not even up for negotiation.
Much of Lebanese civil law, including personal status matters such as marriage, divorce and inheritance, is applied according to the relevant religious sect and in some cases treats women differently to men. Lebanon has 18 recognized Muslim and Christian sects.
A previous phase of confrontation on the issue of civil marriage took place in Lebanon between the end of 2012 and the beginning of 2013. Then, as reported by Fides (see Fides, 07/2/2013), the public discussion had rekindled when a couple, belonging to Shiite Muslim families, had signed their civil marriage contract before a lawyer and not before a religious court.
So far, Lebanese couples who want to celebrate their civil marriage resort to the stratagem of civilly marrying in Cyprus and then registering their union in Lebanon. At that time, the Grand Mufti Mohammad Rashid Qabbani, the highest authority of Lebanese Shiite Islam, issued a fatwa to distrust all Muslim politicians and ministers from supporting any legal form of civil marriage if they did not want to be considered as "apostates". The Maronite Bishops, had reiterated in an official statement that the eventual approval of civil marriage in Lebanon would necessarily entail an amendment to Article 9 of the Constitution, and that in any case "marriage is one of the sacraments of the Church, and civil marriage cannot replace this sacrament". (GV) (Agenzia Fides, 21/2/2019)

ASIA/PAKISTAN - Dowry prohibition: a burden has been removed from the shoulders of the poor