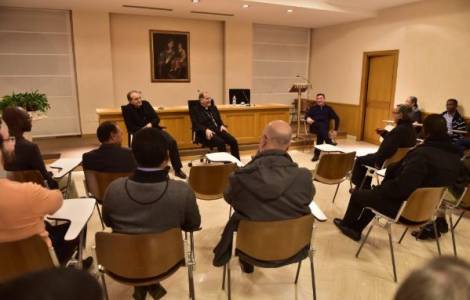 Taipei (Agenzia Fides) - Asia is the continent that offers significant prospects for the missio ad gentes; Pope Francis has already visited Korea, the Philippines, Bangladesh, Myanmar and it seems that he will soon visit Japan; countries such as China and Vietnam are of particular concern to the Congregation for the Evangelization of Peoples: these are the reasons expressed by the President of the Pontifical Mission Societies (PMS), Archbishop Giovanni Pietro Dal Toso, during his participation in at the Continental Meeting of the national directors of the PMS, underway in Taiwan (see Fides 9/2/2019).
During his speech yesterday afternoon, 11 February, the President of the PMS recalled the common commitment of these continental meetings and of the individual National Directions, to reflect in particular on two topics: the theological foundation of the mission and on the future of the Pontifical Mission Societies. "In general, in the missionary world, a theological reflection on the missionary mandate is generally quite uncommon - he said -. I myself do not have much knowledge of the subject, but I could give several examples of what has led me to consider the urgency of the matter. It is above all the question: Why the mission as missio ad gentes?"
In this regard, the Archbishop observed two possible limitations. The first, is a certain dichotomy between theology and pastoral activity, an opposition that must be overcome: "Each one of these two dimensions – pastoral and theological, life and theory, faith and reflection – sheds light on the other, and together they help the Church better carry out its mission... The faith of the Church requires the intelligence of reflection in order to become incarnated and effective in the task of evangelization".
"A second limitation - he continued - is that the lack of theology leads to sentimentality. Let me explain: if reason is wanting, its place is occupied by the sentiments. In that case, it is no longer an ordered reflection that guides our steps, but rather our impressions or, perhaps even worse, the current fashion and trends of the moment". Therefore the President of the PMS listed some theological issues "that call for our reflection and our response, if we want to establish the foundation of our missionary work".
Regarding the future of the PMS, after two centuries of activity and commitment for missions, Mgr. Dal Toso stressed that "our foundational charism is still essential. We should nevertheless ask ourselves how to renew this charism". He then proposed some food for thought regarding the particular challenges, the possible changes to be made in the structures for greater collaboration, the search for alternative forms of financing the mission.
The last issue pointed out by the Archbishop was the Extraordinary Missionary Month of October 2019, which he called "a Providential occasion for us to reconsider certain essential issues such as those I have just presented". He then urged to also use the tools made available by the International Secretariats, in particular the web page october2019.va, where there are many different things, including the guide with the 3 liturgical, theological and hagiographic sections, as well as videos and witnesses". (SL) (Agenzia Fides, 12/2/2019)