AMERICA/CUBA - Referendum on the new Constitution: the Bishops for the respect of the rights and dignity of all 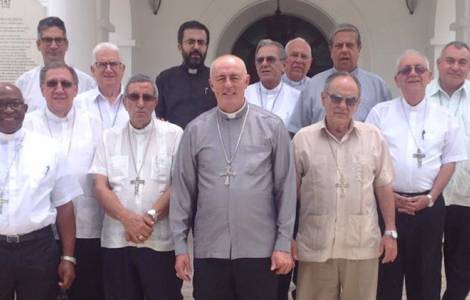 2021-05-04
The religious of Camaguey denounce: "people are tired and stressed, they cannot take it any longer, it is an unsustainable situation"

2020-12-14
Christmas message from the bishops: "Cubans want a better and more peaceful future"

Havana (Agenzia Fides) - "Every citizen, with his responsible vote and according to his conscience, contributes to the building of a society in which all Cubans feel respected in their rights and, at the same time, build a dignified life and thrives with the participation of all, without exclusion". This is the exhortation that the Cuban Bishops launch in their message published with the date of February 2, in view of the popular referendum of February 24 on the new Constitution of the Republic.
The Bishops recall their previous October message (see Fides 29/10/2018) on the subject, and reiterate "the importance of the Constitution for the future of our people", for this reason they make their reflections on the text approved by National Assembly known. "The objective of the Constitution - they state - is to safeguard and guarantee the exercise of the rights and duties of every citizen without any discrimination, respecting his dignity, as recognized by international law".
"With this message the Catholic Bishops of Cuba wanted to give priority to four themes: the exclusion of other forms of full realization of the human being different from that of socialism and communism, the right understanding of a secular state, the integral vision of marriage and the family, economy at the service of the common good ".
In the introduction of the text submitted to referendum, the statement that "only in socialism and in communism can the human being achieve his full dignity" was added. The Bishops comment: "The absoluteness of this affirmation that appears in the constitutional text excludes the effective exercise of the right to the plurality of thought about man and the order of society. Plurality must be safeguarded by the Constitution, as expressed in Article 1". They then recall the statement of Josè Marti, according to whom "a Constitution is a living and practical law, which cannot be built with ideological elements".
Regarding the theme of the secular State, the Bishops write that "this statement does not correspond to what is expressed in the Introduction to the constitutional text, which presents the absolute character of the Marxist-Leninist ideology. Therefore it is good to remember that the freedom to practice one's own religion does not consist in the simple freedom to have religious beliefs, but the freedom of every person to live according to his faith and to express it publicly, having respect for the other". In this context the Bishops repeat their request, expressed in the message in October, for the juridical recognition of the Church, her identity and her mission, and respect for conscientious objection.
Articles 81 and 82 of the current text "open the future path for the union of persons of the same sex to be recognized as marriage", in this way the will expressed by the majority of Cubans who "defended the institution of marriage as a union between a man and a woman is not respected". The Bishops therefore ask that the popular will has to be respected, now and in the future. The Constitution, in art.84, recognizes "the responsibility and essential functions of the family in the integral formation of new generations in moral, ethical and civil values", however it is not stated that "the family has an original and irreplaceable function in the formation of children".
On the last topic, economy at the service of the common good, the Bishops take up what they said in the message in October, recalling the principles of the Church's social doctrine on the universal destiny of common goods and on the integral development of the person and the family. (SL) (Agenzia Fides, 5/2/2019)