ASIA/UNITED ARAB EMIRATES - Faith leaders: it is not faiths, but men who promote violence 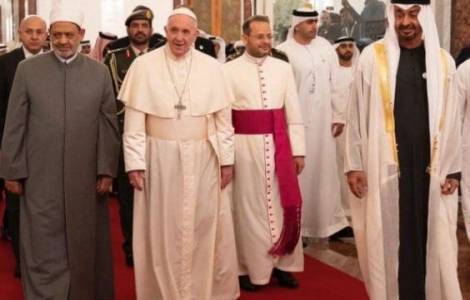 Abu Dhabi (Agenzia Fides) - "Religion itself is not a a factor of conflict: it is its followers who promote wars because of a lack of knowledge of religion itself or politicizing it to their advantage". Terrorist organizations kill in the name of God even if God commands peace": with these words Maronite Patriarch of Lebanon Bechara Boutros Rai comments the "Document on the Human Fraternity for World Peace and Living Together" to Fides, co-signed by Pope Francis and the Sheikh Ahmed al Tayyeb, Grand Imam of Al Azhar, at the conclusion of the Global Conference on Human Fraternity in Abu Dhabi.
The leaders present expressed great appreciation and sharing for the message of peace, justice and harmony, in opposition to the culture of violence, hatred and fundamentalism, contained in the declaration.
When asked by Fides, Olav Fykse Tveit, Secretary General of the World Council of Churches, said: "We are all members of one human family, and it is normal to have different opinions, it is the responsibility of us Christians to reflect the love of God and live as one family, for the good of humanity. We can achieve this goal by promoting the values of citizenship, peace and human Fraternity in every nation".
Ali Al-Amin, a member of the Muslim Council of the Elderly, in an interview with Fides, commends the United Arab Emirates for "the example of tolerance and peaceful coexistence among the different communities" and emphasizes the need to "promote dialogue among all nations and religions to reject fanaticism". "The real cause of violence – he notes - are not religions, but people and their ruthless pursuit of ambition, with the desire to impose control over others. Humanity today needs peace and tolerance in order to continue to prosper".
In addition to Christian and Muslim exponents, there were also leaders of other religious communities at the conference in the Emirates. Swami Brahmavihari, senior Hindu priest of the socio-cultural organization BAPS Swaminarayan Sanstha, told Fides: "Human fraternity has become a more important topic compared to economic growth or climate change. Every religion is a gold mine of values, to live in the world as in a family". The Reverend Kosho Niwanoadded, Buddhist leader, recalls: "In Buddhism, acceptance and tolerance towards others are important pillars: a key contribution to building bridges towards everyone".
Sardar Kulwant Singh Thiara, entrepreneur and citizen of the United Arab Emirates, noting "the absence of any religious discrimination" in his country, tells Fides: "Pope Francis is an example for us all and an encouragement to promote peace, love and harmony in society". (AG) (Agenzia Fides, 5/2/2019)