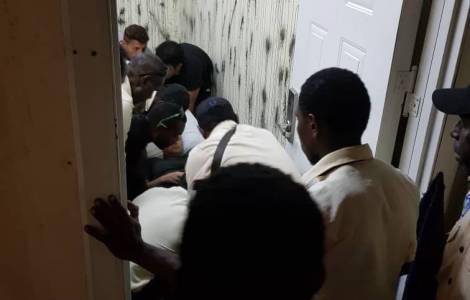 Port Moresby (Agenzia Fides) - "Despair, precarious state of health, self-harm: this is the context in which I found myself in Lorengau, on the island of Manus, and at the Pacific International Hospital (PIH) of Port Moresby where refugees and asylum applicants live": writes Fr. Giorgio Licini, missionary of the Pontifical Institute for Foreign Missions (PIME), and Secretary General of the Episcopal Conference of Papua New Guinea and Solomon Islands in an open letter sent to the Prime Minister of Papua New Guinea, Peter O'Neill.
In the letter sent to Agenzia Fides, the Secretary General expresses his deep concern about the situation of serious insecurity among refugees, which every day leads to acts of self-harm and suicide attempts: "Three cases were recorded only in the two days when I went to Manus on January 20-22", he writes in the open letter sent to O'Neill. "I warmly invite you to make a quick visit to the hospital ward on site - continues the text - where you will find well kept health facilities and extremely polite and professional staff, but also about twenty refugees and asylum seekers in a deplorable state of mental health as well as suffering from cardiac and respiratory disorders, renal failure, fractures".
"The hospital and the health system of Papua New Guinea in general cannot cope with this type of patient. Foreigners welcomed in Manus and other towns in Port Moresby have not committed any crime against the people or the state of Papua New Guinea. Their detention, mainly caused by the Government of Australia, dates back to July 2013 and February 2014, following their arrival as irregular migrants on the Australian coast", explains Fr. Licini.
"After six years - notes the text - the uncertainty about their future, the rejection of claims and the questions of resettlement, the duration of the review process, have exacerbated their mental conditions. From the information I gathered, the situation began to become alarming in September 2018. Self-harm and suicide attempts, due to depression and despair, take place every day. "
On behalf of the Episcopal Conference of Papua New Guinea and Solomon Islands, the Secretary writes: "I urge you, Hon. Prime Minister, to intervene promptly. As in 2013 he agreed to offer help to the Australian government of Kevin Rudd and to the refugees themselves, now is the time to intervene and give a final deadline to the authorities in Canberra to relocate all refugees and asylum seekers present in our country. If this does not stop, people with mental disorders will continue to increase in the coming weeks and months. Who will take care of them? They risk total rejection. It is unthinkable that they will be treated and assisted in Papua New Guinea and spend the rest of their lives here, in total abandonment and poverty". (AP) (Agenzia Fides, 30/1/2019)