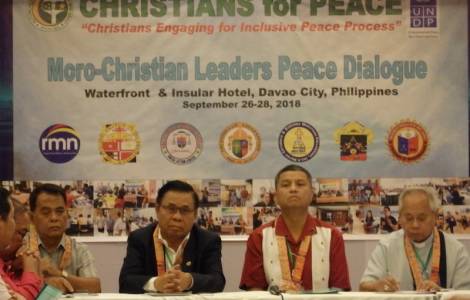 Manila (Agenzia Fides) - Catholic leaders in Mindanao support the new autonomous region that could end the conflict in the south of the country. On the occasion of the referendum in which the people of Mindanano were called to express themselves on the "Bangsamoo Organic Law", the law that establishes and regulates the new region, Christian religious leaders, gathered in the "Mindanao Catholic Church Leaders for Peace" network (MCCLP), affirm that "the Bangsamoro law is not just another legislative act, but a peace agreement which implies the future development of the region".
The path to creating an autonomous region is a political solution that aims to end decades of conflict between Manila and Islamic separatist groups.
"After many failed attempts, this may be the last concrete chance for a just and lasting peace in Mindanao ", Christian leaders wrote in a message sent to Fides.
The network is made up of Bishops, educators, activists, who issued a declaration in view of the referendum. Among them, there is Cardinal Orlando Quevedo, Archbishop emeritus of Cotabato, Archbishop Romulo Valles of Davao, Archbishop Antonio Ledesma of Cagayan de Oro and Bishop Edwin Dela Peña of Marawie and many other bishops of Mindanao, who express a common position in favor of the new Autonomous Region.
The new legislation on autonomy "addresses historical injustices" perpetrated against Muslims and "represents the mutual acceptance of both parties" for the creation of an autonomous Muslim area.
According to Church leaders, there are many reasons why people should support the law on autonomy. "We are aware that the Bangsamoro Transitional Authority and the future elected members of the Bangsamoro Parliament will face many challenges over the next three years", they note. And they indicate the path of the "horizontal" peace process, with a commitment to the "dialogue of life, action and spirituality" between Christians and Muslims.
"We also need to engage in interreligious dialogue for mutual respect and understanding so as to reduce or eliminate prejudices", they add.
As supporters of peace, "we must also know what the Bangsamoro law says in order to make an informed and responsible choice, and vote on the merits of the proposal, not on the basis of prejudices". Christian leaders offer their readiness to help "for the creation of an inclusive society in Mindanao".
The referendum on autonomy was held on January 21st and the results are expected for January 25th. The referendum calls for the approval of a self-managed area known as "Bangsamoro", known as the "Nation of the Moors", referring to the name that the Spanish settlers gave to the Muslim inhabitants of the area in 1500.
The Bangsamoro Organic Law confers executive, legislative and fiscal powers to a region that is among the poorest in the country. The Philippine national government will oversee defense, security, foreign and monetary policy and will appoint a transitional authority led by the Moro Islamic Liberation Front (MILF) until the elections of 2022, when the population of the region will vote for its Parliament and a Prime Minister.
The area, with a Muslim majority, is at risk of infiltration by radical Islamist groups. MILF has de-legitimized extremist militants and said that widespread disillusionment was among the factors that generated accession to radical ideas and the Islamic State, which in 2017 occupied the city of Marawi. The Filipino military spent five months on ground and carried out devastating air strikes to defeat the militants. Since then, the whole of Mindanao is under martial law.
MILF and the government hope that autonomy will lead to greater investment in infrastructure and induce economic and social development, allowing exports to expand, as well as the development of the palm oil industry. (SD) (Agenzia Fides, 22/01/2019)