AMERICA/PANAMA - After the Days in the dioceses, WYD begins this evening: young people from all over the world "in serach of many answers" 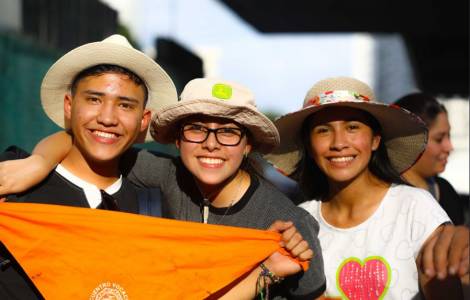 2019-11-06
Bishops: "listening, respect and dialogue are needed to build the homeland"

2019-07-10
May governors work for the dignity of the person and for the common good, and may citizens contribute to building a better Panama

2019-03-11
Conclusions of the Assembly of Bishops: "Let us not allow negativism to paralyze us"

2019-01-28
The Pope: "The Lord and His mission are not something temporary, they are not only a World Day of Youth: they are our life!"

Panama City (Agenzia Fides) - More than 30,000 young pilgrims from all over the world have arrived in Panama for World Youth Day (WYD) which will officially begin at 5pm today, with the opening ceremony and Mass. The chosen theme is: "I am the servant of the Lord. May it be done to me according to your word" (Lk 1:38). According to the organizers, most of the young people who arrived for WYD come from Colombia, Poland, Brazil, United States, Mexico and Guatemala.
Over 14 thousand young people took part in the "Days in the Dioceses" held in the eight Panamanian ecclesiastical jurisdictions and in as many dioceses of Costa Rica, from 16 to 20 January. These Days were designed to welcome young people from Christian families, who made them feel "warmth and affection" and "introduced them in the richness of the local culture", as Emmanuel Sandoval, coordinator of the Bethangirû-Papaboys Paraguay group, told Agenzia Fides.
During these days, activities of spiritual, missionary, supportive and cultural nature were organized, with the intention, expressed by the organizing committee, "to leave this experience of guiding young people to a missionary discipleship as a legacy to future WYDs". "Sharing with a group of young people their culture, their customs, their language, their joy and, at the same time, showing them the great values and the beauties of every parish community, is an exchange that will last and will be remembered in the future", said Mgr. José Francisco Ulloa, Archbishop of Panama, in a press conference. The Archbishop also emphasized that for the first time a neighboring country, Costa Rica, participates in the organization of a pre-WYD, and since both the countries involved are small, "it allowed us to have not anonymous, but personal contacts among pilgrims, families and local youths, as I was able to experience myself".
Summing up the experience of the young people in his group, Emmanuel Sandoval ensures that their expectations are "very high". "We have come in search of many answers, I believe we have already found many of them, we are praying that what God wants is done, so that we can see what He wants to show us, and we expect a lot of joy, prayer and fraternity among young people the world".
The Jewish and Muslim communities also welcomed the young participants in WYD, the fruit of long-standing fraternal collaboration. The synagogue of the city of Panama welcomed young Poles, while the mosque of Colón housed about 400 Chileans, Brazilians and Argentinians. In Argentina, in Buenos Aires, and in the United States (in the diocese of Fort Wayne-South Bend, in the Archdiocese of Seattle and in that of Galveston-Houston) retreats for young people in parallel with WYD are being organized. (SM) (Agenzia Fides, 22/01/2019)