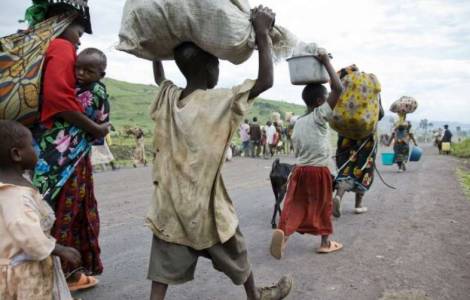 Bukavu (Agenzia Fides) - The flight from Africa is not over. Young people continue to dream of a better life in Europe. A dream that often turns into the nightmare of a life without a future in a refugee camp. This is what Alberto Rovelli, among the White Missionary Fathers in Bukavu, in Kivu tells Fides. "I did not think the phenomenon was so widespread here in Congo", observes the religious. "Here everyone has very sad and painful stories to tell, and their stories are to be heard and meditated because they can teach us so much". According to UNHCR (UN agency for refugees), at least 800,000 Congolese have fled their Country in recent years to seek a better life in other Countries. They flee violence, misery, unemployment. Their main destinations are Uganda (which hosts 240 thousand Congolese) and Burundi (80 thousand).
A man told Fr. Rovelli who, to secretly emigrate from their parents, many young people sell their house, car or whatever they have and then leave on foot. When they arrive in Bujumbura (Burundi) they are interned in a huge refugee camp where thousands of refugees like them are waiting to continue their journey to Europe, America or even another African Country. They have no documents or, if they have them, they do not guarantee them the possibility to continue the journey. So they try to get hold of false documents. Thus exposing themselves to scams. "We have come to know - continues Father Alberto - that there are hundreds of young people from Bukavu who have been waiting for false documents to flee for 10 years and often give a lot of money to self-proclaimed mediators who then flee with the money and are no longer seen. At that point, they put themselves in a situation of no return: they are cut off from any connection with their families and their land, they cannot go back to Bukavu, but they cannot even continue their journey, so they live in desperation".
According to another story, a young man was presented to the refugee camp of Bujumbura. "Just to get into the camp - the missionary explains - they asked him a thousand dollars, so he asked the camp manager how long he would have to live in the camp before going to America, he replied that before him there were two thousand people (men, women, underage girls), but if he had 10,000 dollars he would leave after 15 days". Faced with that answer, he had no desire to leave Congo, thinking that with $ 10,000 he could do something good by staying home.
"From the Democratic Republic of the Congo - concludes Father Rovelli - we do not just take away the minerals, without even paying taxes, now we steal youth". (EC) (Agenzia Fides, 19/1/2018)