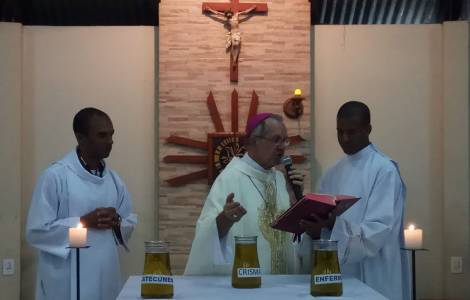 2020-01-15
First missionary experience of the diocese of Floresta: we want to show the missionary face of the Church

2019-12-13
Bishops: the right to freedom of expression does not cancel respect for people and their values

2019-12-03
Local teams, advocacy, networking: the priorities of the Pastoral Care Service for Migrants

2019-11-06
CIMI: the natives can no longer move safely in their territories

São Gabriel da Cachoeira (Agenzia Fides) - Pope Francis insists on the fact that the local Church must have an Amazonian and indigenous face. To achieve this goal a process of inculturation is needed, one of the possible new ways of the Synod for the Amazon convened for next October. Mgr. Edson Damian, Bishop of São Gabriel da Cachoeira, in an interview with Agenzia Fides, underlines that "all the sacraments must be inculturated", as the conciliar constitution Sacrosanctum Concilium affirms, but "we must not limit ourselves only to translating in the vernacular languages the sacraments of the Church, but these must have a much deeper inculturation".
In this regard, the Bishop tells Fides that "among the indigenous peoples of Alto Rio Negro, mass in the Tukan language has already been translated and celebrated in various places", which should be assumed as usual by the peoples who speak that language. The same can be said of the rite of baptism, an experience that is also realized in the Prelature of Itaituba, where the Mundurukú live, points out the local Bishop, Mgr. Wilmar Santin to Fides.
After a hundred years of mission among the Munduruku, in the last ten years, Mgr. Santin tells Fides, "great emphasis was placed on the construction of chapels in the villages, the Sunday celebrations of the Word began and liturgical groups were created". According to the Bishop of Itaituba, "the first step was to translate songs in the Munduruku language".
Faced with these new paths, Mgr. Santin emphasizes that "it would be necessary to encourage the composition of chants in one's own language, at one's own pace". Furthermore, it is necessary "to form the ministers of the Word well, so that they may have creativity and inculturate the liturgy, enriching the celebration of the Word with elements of their culture".
In Alto Río Negro, "we are striving to save the cultural values of the peoples and include them in the catechesis. We have already collected almost seventy topics, starting from culture, which complete the catechesis and now we need to translate this material and make it known to as many catechists as possible", explains the Bishop of São Gabriel da Cachoeira.
Mgr. Santin recognizes that "sometimes we have ideas in our head and when we reach a place we find something different". In this sense, seeing that the Munduruku natives used a lot of smoke in their rituals, he thought of introducing incense during the celebrations. The Bishop also observes that the natives "celebrate their feasts in a creative way, according to their reality, with the participation of neighboring villages, which is why we are studying how to inculturate these feasts. It is not about creating a wild creativity, but an inculturated and good creativity", concludes the Bishop. (LMM) (Agenzia Fides, 4/1/2019)