EUROPE/ITALY - The Scalabrinians on Global Compact: "the entire planet feels the need to treat the issue of migrants in a unified manner" 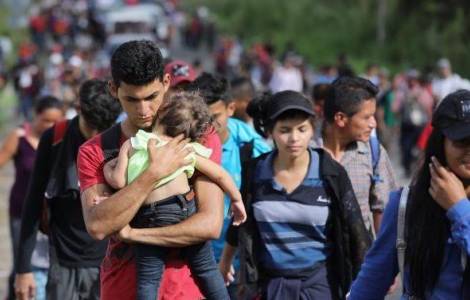 Rome (Agenzia Fides) - "The Global Compact on immigration testifies that the entire planet feels the need to treat the issue of migrants in a unified manner. This is a theme to be considered without the political borders of the globe, but with real physical borders. The planisphere should be seen not on the side of national colors, but with the eyes of those who are forced to travel to seek better conditions of life".
This is what Sister Neusa de Fatima Mariano, general superior of the Scalabrinian Missionaries, a congregation that since its foundation deals with the care of migrants, said in a note sent to Agenzia Fides.
The "Global Compact for Migration" is the agreement the UN wanted in order to give a global response to the problem of migration. Signed by more than 190 countries in 2016, at the UN General Assembly in New York, and reaffirmed at the Assembly last September, it has the principle that the issue of migration should be tackled at a global level, through a network of international collaboration for the reception of migrants and refugees. There is talk of a disciplined, safe, regular and responsible migration, providing a series of commitments by all countries to protect the rights and needs of those forced to flee. The main points include the fight against xenophobia, exploitation and human trafficking; the strengthening of integration systems, humanitarian assistance, development programs and border procedures, respecting international law.
"It is the story of the human being to say that migration brings positive effects in the communities they welcome", continues the general superior. Migration brings dialogue, exchange and is the basis of the true Christian soul. It is advisable that countries like Italy, with a deep migratory history, are aware of this and participate actively in supporting the Global Compact. This has an even greater value in light of the recent International Migrants Day, where the Pontiff recalled how Jesus knows the pain of not being welcomed very well".
During the Angelus on Sunday, December 16, Pope Francis praised the approval of the Global compact with these words: "Last week the Global Compact for Safe, Ordinary and Regular Migration was approved in Marrakech, Morocco, which intends to be a reference framework for the entire international community. I therefore hope that it will work with responsibility, solidarity and compassion towards those who, for various reasons, have left their country, and I entrust this intention to your prayers". (SL) (Agenzia Fides, 20/12/2018)