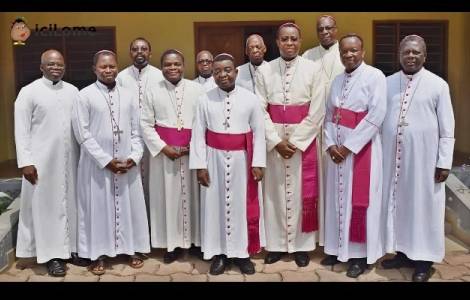 2021-10-04
Churches closed until mid-October, but missionaries do not stop solidarity

Lomè (Agenzia Fides) - The Bishops of Togo are calling for constitutional and institutional reforms in view of the parliamentary elections scheduled for 20 December, in accordance with the road map of the Economic Community of West African States (ECOWAS). This is what emerges after the Ordinary Assembly of the Bishops' Conference of Togo (CET), which saw the Bishops gathered in Lomé and Aného from 12 to 16 November to face the socio-political situation in the country.
In the statement at the end of the third ordinary session of 2018, TEC expresses its concerns on the electoral process currently conducted by the Électoral Nationale Indépendante Commission (CENI): "It is obvious that the conduct of the elections without the necessary reforms will not solve the Togolese question, it will only exasperate tensions and violence", reads the statement of the Bishops of Togo sent to Agenzia Fides. According to the Bishops, Togo needs "a radical change in the way of governing and doing politics, if the system does not change, the problems will always remain the same".
The Togolese Church notes that "the unilateral preparation of the elections, violating some provisions contained in the ECOWAS roadmap, could bring the country back into chaos".
The main opposition coalition, at the origin of the demonstrations that have shaken the country for more than a year, denounces the irregularities in the organization of the vote. The alliance, composed of 14 parties, has decided to boycott its participation in CENI, where it should have representatives.
"For decades, the struggle for freedom, democracy, political alternation and reconciliation processes in our country have not succeeded because of the bad faith of political actors, more concerned with their personal interests than with the common good", denounce the Bishops.
On 9 November the government adopted a constitutional reform project that includes presidential elections and provides for the possibility of holding two presidential terms. In September 2017 the parliamentary opposition rejected the text that would allow President Faure Gnassingbe to run in 2020 and 2025. The latter has been in power since 2005, after the death of his father, who had ruled the country for 38 years (see Fides, 18/9/2017). A new government bill should be studied by the Legislative Commission before being presented to Mps in the next few days. (SG/AP) (Agenzia Fides, 22/11/2018)