VATICAN - Cardinal Filoni to the religious women of Saurimo: intimacy with Christ in prayer and generous service to the world 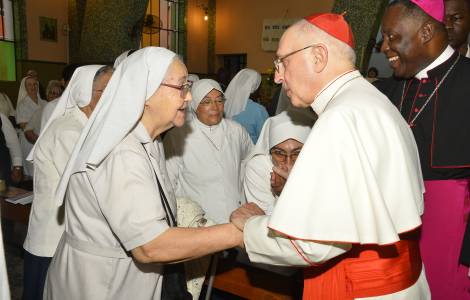 Saurimo (Agenzia Fides) - The apostolic exhortation Evangelii gaudium and the announcement of the extraordinary Missionary Month, which clearly mark, together with other aspects, the missionary tone of the entire Pontificate of Pope Francis, was the starting point for Card. Fernando Filoni to consider some aspects of female consecrated life.
During his visit in Angola (see Fides 9/11/2018), speaking to the religious women of the Ecclesiastical Province of Saurimo on the morning of Tuesday, November 13, the Prefect of the Missionary Dicastery said: "Consecrated religious life is a gift from God to the Church through which he wants the consecrated persons, men and women, to make the characteristics of Jesus visible in the world - chaste, poor and obedient -. The current evils of our society can be overcome by the rediscovery of the evangelical values of poverty, chastity and obedience. And to do so, we must value our encounter with Christ, to renew the gift of our vocation".
Therefore the Cardinal urged the religious women to dedicate themselves to reach "spiritual, human and emotional maturity" through prayer and permanent formation: "You must have a style of life marked by the intimacy with Christ in prayer and by a generous service to the world". "In a world in constant change and marked by so many contradictions - he continued - in which the tendency is to exclude God from fundamental choices, it is very easy, even for religious women, to lose their identity. In fact, the evils that afflict today's globalized society, such as the search for autonomy, greed, power, the lack of a spirit of service, ethnic and tribal divisions, the banalization of love and sexuality, do not spare the diocesan clergy and even the men and women religious here in Angola, on the contrary, threaten your Church, your religious communities or already cause serious damage to them".
Through the total giving of life to God and to the service of the communities, the poor and the marginalized, the religious live this missionary dimension of the Church "that goes forth", bearing witness to the radical following of Jesus Christ. "Therefore - Cardinal Filoni exhorted – commit yourselves to a personal encounter with Christ through personal and community prayer ... Commit yourselves to creating religious communities that are real 'places of celebration and forgiveness' and an environment that is both a 'mission' and prepares for the mission. In these communities fraternal communion is lived because we are members of the same religious family". The fraternity that distinguishes consecrated life in its community dimension must be "a strong and eloquent sign" of the fraternity of the whole Church.
Finally, the Prefect of the Congregation for the Evangelization of Peoples reaffirmed the importance of permanent formation: "For a creative fidelity to religious vocation and to respond to the needs of the mission and the challenges of today's world, you must commit yourselves to permanent formation, which is a constant effort of spiritual, human, religious and intellectual renewal; it is a dimension of the process of permanent conversion". (SL) (Agenzia Fides, 14/11/2018)

AFRICA/CENTRAL AFRICA - Assault against the Comboni nuns: "The goal was the loot, not religion"