AMERICA/MEXICO - Mass at the border for the migrants who died while trying to cross it, while the caravan proceeds 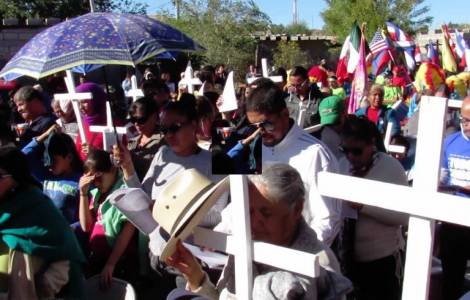 Ciudad Juarez (Agenzia Fides) - While the caravan of Central American migrants crossing Mexico to reach the US border continues, a Mass was celebrated at the border for those who died trying to cross it. The celebration, called "Misa Binacional 2018" has over the years, become a custom, took place at the foot of the "Maglia de Anapra" or border wall.
In his homily, Bishop José Guadalupe Torres Campos, Bishop of Ciudad Juárez (Mexico) said, among other things: "We deplore the suffering of our migrant and refugee brothers and sisters in Latin America and the world: those who have never returned to their homes, those who died before reaching their destination. The time has come to proclaim justice, so that every man, woman and child has the freedom to emigrate according to his needs, to improve his life and give his contribution to society".
The Mass had only one altar, but was divided into two: one part on Mexican soil (Chihuahua) and the other in the state of Nuevo Mexico (United States), divided by the steel wall built between Ciudad Juarez and Sunland Park. Mass on the border was held last year on Rio Grande, between Ciudad Juarez and El Paso, but this time the Anapra area had to be chosen, because a second section of the steel wall is being built near the river. This wall of more than 6,5 kilometers long and more than 6 meters high, has a cost of 22 million dollars, according to data from the American Border Patrol.
Although the Border Patrol of El Paso had agreed to open the door of the wall so that the participants in the Mass could celebrate together, to see a group of 70 migrants arriving with the flags of various countries, accompanied by the staff of the Mexican House of Migrants, they decided to keep the door closed, so the Eucharistic celebration took place through steel bars.
At the end of the celebration, both the Mexican Bishop and the Bishop of El Paso, Mgr. Mark Joseph Seintz, stressed that "the problems of migration must be resolved through dialogue, never with violence, with stones, weapons or walls", and they repeated the words of Pope Francis to the media: "welcome, protect and integrate migrants".
The diocese of Ciudad Juarez sent a video of the celebration to Fides that saw the participation of various Catholic groups from all over the diocese, who also arrived to help migrants who have been sleeping at the foot of the wall for some days, waiting to cross the border with the required permits.
The caravan of thousands of Central Americans last night stopped in Mexico City, where the parishes and religious communities of the archdiocese provided food and assistance to migrants, who will soon leave and head north. The Apostolic Nuncio, Archbishop Franco Coppola, who is in Tabasco for the spiritual retreat of priests, praised the attitude of the Mexicans: "My admiration for what the Mexicans are doing, from Tapachula to Oaxaca, to Veracruz , Puebla and Mexico City, where I saw how the Mexicans, simple people, but also priests and Bishops, are helping our brothers who are traveling, on the road to give a better future to their children, to their families". (CE) (Agenzia Fides, 07/11/2018)