AMERICA/BRAZIL - Salesian Missionaries in the Amazon for over a century: experiences and perspectives 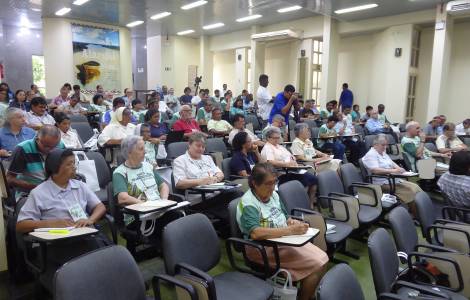 Manaus (Agenzia Fides) - Starting from the Preparatory Document of the Synod for the Amazon, presented by the indigenous Salesian Justino Sarmento Rezendo, a hundred Salesians of Don Bosco (SDB) and Daughters of Mary Help of Christians (FMA), met in Manaus from 1 to 4 November, to examine the work carried out in the various countries of the Amazon by the Salesian family for over a hundred years, indicating possible paths for the Congregation, for the Synod and for the whole Church.
The Salesians are a missionary congregation, stresses Father Juan Bottasso to Agenzia Fides, a missionary in Ecuador for 59 years, a mission that has always been marked by the social situation, especially at present, in which there is violence in the region, due to the consequence of conflicts that derive from the exploitation of the area by large multinationals, according to José Juncosa, Vice-Rector of the Salesian Polytechnic University of Ecuador.
In the synodal dynamics, it is important to know the ecclesial experiences that are carried out in the Amazon and that can help find new ways for the Church, highlights Don Diego Clavijo to Fides, who has been working with the Achuar indigenous people in Peru for 18 years. The ministries, very present in the ecclesial life of the people, contribute to creating that Church with an Amazonian face and an indigenous face that Pope Francis demands.
The meeting in Manaus served to develop proposals that could help the Salesian mission in the Amazon in the future, as well as the construction of new paths proposed by the Synod. With regard to the Salesian congregation, the need to commit oneself to the delimitation of indigenous lands, to accompany indigenous pastoral care in the urban context, to care for the formation of indigenous vocations and ministries, to promote the diffusion of indigenous culture in local languages was reiterated in order to make a Church that listens and creates a common inculturated project of youth pastoral care concrete.
With regard to the issues that the Synod will address, the Salesian family considers to promote the ministry of the laity important, and in particular of women, who are the majority in the Amazon Church and must be more valued and made protagonists.
Hence the elaboration of missionary projects that guide pastoral care; the catechumenate as a path of formation processes; the elaboration of an Indian liturgical rite; the formation of indigenous candidates to priesthood in their reality, giving visibility to the Amazon reality and the creation of an economic fund to support the missionary work in the Amazon. (LMM) (Agenzia Fides, 06/11/2018)