AMERICA/HONDURAS - "We are not criminals, we are migrants": three thousand Hondurans fleeing their country 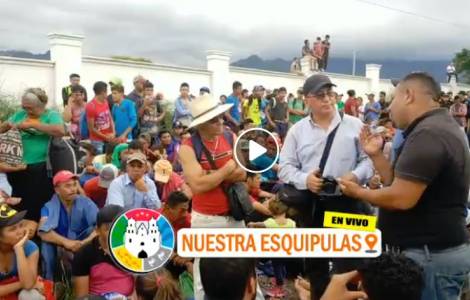 2020-10-16
The National Director of the PMS: "It is important to make the link between charity and evangelization known"

2020-09-29
Cardinal Maradiaga: politicians must fulfil what they promise in the electoral campaign

2020-09-07
Cardinal Rodríguez Maradiaga for the Month of the Homeland: "Power is service and search for the common good"

San Pedro Sula (Agenzia Fides) - They have now traveled about 300 km, from Tegucigalpa (Honduras) to Zacapa (Guatemala): there are about three thousand Hondurans who during their their journey to the United States welcome other brothers from Central America who flee like them from poverty, violence and corruption. They spent the night welcomed by a group of doctors and nurses from Guatemala, who followed the caravan route through social networks and then went out to support and assist them.
The note sent to Fides by CELAM reads: "Like the ancient Israelites, the Honduran people are walking in their exodus, fleeing from political and economic slavery imposed by corruption and the deterioration of government systems. There are many forced migrations and in Latin America these migrations are marking the current history".
There are about 3,000 "who completed three days of walking this October 15. They are thousands of kilometers that they will have to travel on foot, they are mainly peasants, men, women and children, even disabled people in wheelchairs, affected by poverty, violence and corruption, they are migrants who touch the heart of the world".
Several digital media and social networks of Honduras and Guatemala have broadcast part of the journey of the caravan live. The images show a growing crowd, a human tide never seen before, as others join as the journey progresses.
The note sent to Fides underlines that the migrants are peaceful people, who aim to reach the United States, passing from Mexico, which stretches from the border of Guatemala to the United States, covering about three thousand kilometers. The Catholic Church and humanitarian organizations welcomed them to Esquipulas (Guatemala), offering hospitality and food. Esquipulas is the city near the border with Honduras and Salvador, where the dialogues that gave rise to the peace negotiation processes in Central America, especially in Guatemala, were born.
The caravan departed from San Pedro Sula, 180 kilometers from the capital of Honduras Tegucigalpa, to escape the poverty, violence and corruption that exists in the country.
Singing the Honduran national anthem, praying and chanting, "Yes, we can" and "Honduras we love you", the migrants did not stop despite the Guatemalan authorities had announced not to allow their entry into the country. "We have the right", they said, "we are not criminals, we are migrants".
On social networks it is very striking that the first thing they ask for are prayers for them and their family members. The threat of US authorities to cut aid to Honduras is well known if this march continues. (CE) (Agenzia Fides, 17/10/2018)

AMERICA/HAITI - Three days of prayer and fasting in all dioceses: "Let's give Haiti a chance!"