AMERICA/BRAZIL - Mgr. Irineu Roman: "to give value to the expressions of faith brought by the people of the Amazon" as the Synod asks 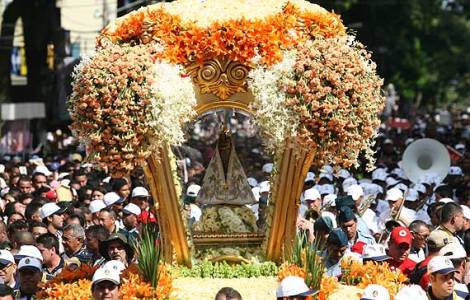 Belem (Agenzia Fides) - Yesterday, Sunday October 14th, the second Sunday of the month, the "Cirio de Nazaré" feast was celebrated, as every year in Belem, capital of Pará state and one of the largest cities of the Amazon, a tradition that dates back to 1700, when the image of the Virgin of Nazaré was found in the middle of the forest. The Virgin soon became the object of great devotion among the people of the region, and in 1793 the first Marian procession was held, which currently gathers two million people, and is one of the largest Catholic demonstrations in Brazil and in the world.
Popular religiosity and, above all, Marian devotion have always been an important element in the Catholic tradition in all corners of the world, in this regard Mgr. Irineu Roman, Auxiliary Bishop of the Archdiocese of Belem, tells Fides "With absolute certainty, the Cirio de Nazaré is one of the strongest expressions of popular religiosity in Brazil, together with the Feast of Our Lady of Aparecida" celebrated on October 12. The Bishop explains that "Cirio de Nazaré involves the whole context of the people of the Amazon, because it arose among the inhabitants of this region, it is the result of the popular devotion of this people, to the point that at first it was not coordinated by the Church, but by the people: from the discovery of the image thanks to which the miracle occurred, from that moment the community of that time began to gather there to pray".
According to Mgr. Roman "the pilgrimage began there, where the basilica of Our Lady of Nazaré was built, and 'el Cirio' took on the dimension it has today". For this reason, the Prelate insists that "in the context of the Synod of the Amazon, this is a great expression of popular religiosity that urges us to increasingly value the expressions of faith brought by the people of the Amazon". Then he concludes by underlining that "the Indians, one of the great focal points of this Synod, together with the issue of integral ecology, which touches all the dimensions of life, are very much reflected in the Cirio de Nazaré, which is situated in the intimate of the reality that we are living in this process of preparing the Synod". (LMM) (Agenzia Fides, 15/10/2018)

AMERICA/NICARAGUA - The Archbishop of Managua postpones the feast of Santo Domingo, the feast of the capital, due to the pandemic