ASIA/SOUTH KOREA - Cardinal Yeom: "We pray to be able to send priests and to celebrate the Sacraments in the North" 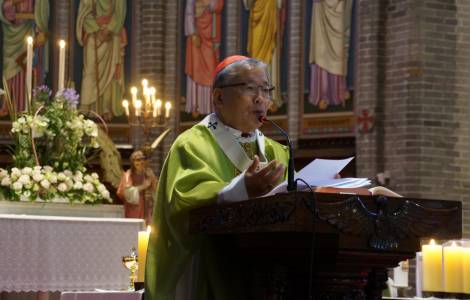 Seoul (Agenzia Fides) - "I am pleased and comforted to learn that, during his visit to the Vatican next week, President Moon Jae-in will bring the message of North Korean leader Kim Jong-un with him, who wishes to invite Pope Francis in Pyongyang": in a note sent to Agenzia Fides, Cardinal Andrew Yeom Soo-jung, Archbishop of Seoul, comments on the news, released yesterday by the spokesman of the "Blue House", of Kim Jong-un's invitation to the pontiff, to be presented on the occasion of the European tour of President Mooon Jae-in, in Italy and in the Vatican on 17 and 18 October.
Cardinal Yeom reminds Fides: "The Holy Father has always worried and has peace on the Korean peninsula at heart, he recalled the Koreans in his prayer whenever there were important moments in recent history, I hope these efforts will help build authentic peace on the Korean peninsula, above all, as Apostolic Administrator of Pyongyang, I sincerely pray for the days to come, so that we can send priests and religious to the North and celebrate the Sacraments together".
Currently, the Catholic community in North Korea is commonly referred to as the "Church of Silence" because, starting from 1948, the North Korean regime began to eliminate all traces of the presence of faith, razing churches and confining ecclesiastical personnel and believers to concentration camps.
In North Korea there were, until 1950, over 55 thousand believers and 57 churches built, with missionaries, Catholic schools and flourishing pastoral activities. Today there are no Catholic bishops, priests or religious.
Starting from 1989, with the collapse of the communist bloc, there was a first change in the religious policy of the regime which recognized a "Catholic Association" and a "Christian Federation", to which today about three thousand faithful officially controlled by the government adhere. The priests of the South, who went to North Korea in recent years, remain convinced of the existence of many other men and women who in the North still live faith in Christ in an intimate and private way. (PA) (Agenzia Fides, 10/10/2018)