AFRICA/CENTRAL AFRICA - A missionary in Bangui: "The first “customer” of our bricks was Pope Francis" 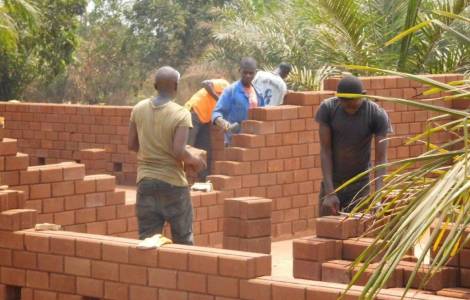 Bangui (Agenzia Fides) - "It is a small dream that we have been nurturing for years and that, thanks to some lucky coincidences, and the help of several people, we have finally managed to fulfill. If there is a Country to be built - we asked ourselves - why not try to make bricks? Real bricks, new bricks, strong bricks, stronger than the war", writes to Agenzia Fides Fr. Federico Trinchero, a Carmelite missionary in Bangui, presenting the small building site for the construction of bricks.
Fr. Frederick explains the meaning of the initiative initiated by the Carmelites. "After five years of war and many more of bad government, Central Africa is a Country to be rebuilt - or, more honestly, to be built for the first time - everyone says so. There are those who insist on continuing the war, destroying what little was built in almost sixty years of independence. Fortunately, there are also those who insist on believing that the Country is not condemned to war and that it is possible, discreetly and with determination, to build small construction sites of peace and hope".
"The purchase of machinery - and the start of production - was possible thanks to the contribution of the French association "Un P.A.S. avec les Frères Jaccard" (founded by two brother priests, one of whom recently died, ex-missionaries among the lepers of Cameroon) and a loan from the Italian Episcopal Conference, thanks to funds donated through the 8xmille to the Catholic Church", says Fr. Federico.
"Bricks are intended for the construction of our missions, but also for sale" explains the missionary who reveals: "Perhaps you will not believe it, but our first client was Pope Francis. For several months - following an explicit wish of the Pope, after his visit to Central Africa in 2015 - the construction of a center for malnourished people has been under way in Bangui. The works are followed by the Apostolic Nunciature and a small building was built with the bricks produced at Carmel"
Fr. Frederick emphasizes that "this activity has a double symbolic value for us. First of all a small but concrete contribution to the work of reconstruction of the Country, through the creation of places of formation just like the construction site of the bricks and the agricultural school. In addition, most of the workers who participated in the training - and now produce bricks or work on the building site - are former Carmel refugees".
"Then there is a second symbolic value. When the first French missionaries arrived in Central Africa, at the end of the 1800s, one of the first activities installed in the missions were brick kilns with which they built churches, houses, schools, dispensaries and cathedrals. After more than a century our community discreetly recovers this activity, symbolically linking us to these ancient missionaries", concludes Fr. Federico. (L.M.) (Agenzia Fides, 9/10/2018)