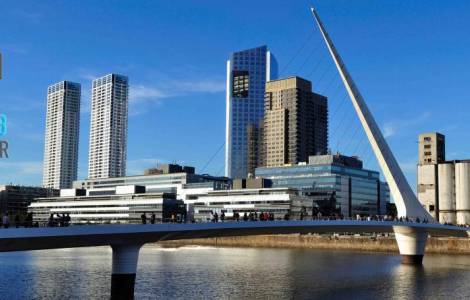 2022-05-03
Six Argentine missionaries in the Peruvian Amazon within the framework of the project "Argentine Church, Amazon is your mission"

2022-04-13
Artemide Zatti, the first Salesian Brother, consecrated, but not a priest - to be proclaimed a Saint: a message of hope

2022-03-21
No to the crime of trafficking in Ukraine and in the world: war particularly exposes women and children

Buenos Aires (Agenzia Fides) - The 2018 G20 Interfaith Forum will take place from 26 to 28 September 2018 in Buenos Aires, Argentina and the theme for this year’s Forum is “Building Consensus for Fair and Sustainable Development: Religious Contributions for a Dignified Future". The Forum is organized by the G20 Association of Interfaith Forums, the Argentine Council for Religious Freedom (Calir) and the Latin-American "Ethics and Economics" Project (Creas-Pidesone).
The G20 is a forum that brings together leaders, finance ministers and central bank governors, created in 1999, after a series of financial crises, which takes into account the new economies under development. The G20 Interfaith Forum is in its fifth edition, the first was held in 2014 in Australia, and its aim is to develop recommendations on priority issues that draw on interfaith insight and experience. Particular attention is paid to ways that religious communities can contribute to the host country’s priorities.
The Interfaith Forum opens in Argentina’s Cancillería and will end at the National Library. It will include reports, round tables and group work to be held simultaneously at the headquarters of the Argentina Episcopal Conference (CEA) and at the Sheraton Hotel in Retiro.
More than 100 participants are expected, including Rowan Williams (president of Christian AID, Bishop emeritus and Anglican theologian), Cardinal Pedro Barreto (Vice president of the Episcopal Conference of Peru and vice president of Repam), Katherine Marshall (of Georgetown University, Washington), Cole Durham (co-founder and professor of the International Studies Center for Law and Religion - ICLRS - Brigham Young University, BYU), Father Augusto Zampini (theologian, of the Dicastery for the promotion of integral human development of the Vatican), Chris Ferguson (president of the World Communion of Reformed Churches, CMIR), Gabriela Michetti (vice president of Argentina), Claudio Epelman (Latin American Jewish Congress, CJL), Metropolitan Emmanuel (Adamakis) of the Greek Orthodox Church of France, Rabbi David Saperstein (former ambassador of the US Government's Religious Freedom Commission).
For the inaugural session, in addition to the welcome speech of the organizers, there will also be video messages on behalf of Pope Francis, of the Ecumenical Patriarch of Constantinople, Bartholomew I, and of the Secretary-General of the World Baptist Alliance, Elijah Brown.
Argentina continues to live in a situation of popular tension: protests continue on the streets, while President Macri seeks international support. In addition to the protests and the blockades that occurred in these days in the Argentine capital, a general strike was held yesterday by the unions against the government's adjustment policies. Meanwhile, President Mauricio Macri is participating in the United Nations General Assembly in New York, where he is trying to regain confidence in the Argentine economy and make a new agreement with the International Monetary Fund. Since the beginning of the year, the Argentine peso has accumulated a devaluation of over 52%, which has generated an increase in inflation and popular discontent (see Fides, 24/09/2018). (CE) (Agenzia Fides, 26/09/2018)

EUROPE/RUSSIA - A free market in the parish, for the mutual support of the faithful