AMERICA/COSTA RICA - After 10 days of strike and violence first meeting between government and trade unions, the Bishops present 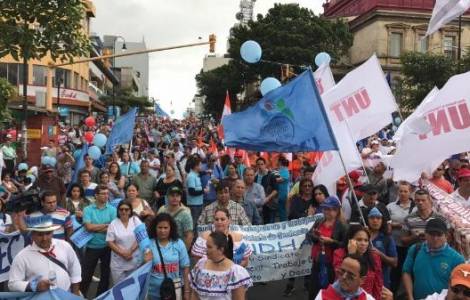 2019-06-08
Archbishop Quirós: "as a Church we always choose dialogue, but it has to be constructive dialogue"

2018-09-20
After 10 days of strike and violence first meeting between government and trade unions, the Bishops present

Limon (Agenzia Fides) - "The acts of violence that have occurred have generalized a climate of fear in the population and have gone beyond the line of respect for life and coexistence": these are the words with which the Bishop of the diocese of Limón, Mgr. Javier Gerardo Román Arias, deplored, in a note sent to Fides, the recent violent incidents that occurred in the context of the national strike. In the province of Limón, in fact, the protests were exploited by groups of vandals to create chaos. Last week, for three consecutive nights, some groups looted shops, closed the streets and threw artillery bombs against two commercial business vans and a telecommunications tower.
Mgr. Arias has launched an appeal to believers and authorities, because it is not right that those responsible for these acts of violence are taken as a reference for "stigmatizing all the people living in this province". "These painful events should be read as an expression of the social discontent that exists in our province because of the historical situation of lack of opportunities, which requires a global and non-palliative response".
The general strike has almost paralyzed the country for 10 days. The protest, which began with small demonstrations, has widened by responding, according to local media, to a too strong and violent reaction by the police towards protesters. According to some observers, it is the biggest strike seen in the country in the last 20 years, and the population is affected by the lack of services in health, education and transport field. Problems in the distribution of petrol and in the tourism sector are likely to block the country, because they are the soul of the Costa Rican economy.
Employees are protesting because the government has taken away many benefits from civil servants, increased the tax burden and made cuts in public service spending, which has caused the reaction of all the unions. Unfortunately, in these days there have been violent clashes and even the death of a 17-year-old boy due to a bullet fired by the police.
Only after 10 days, it was possible to organize a meeting yesterday, September 19, between the government and the unions to find a solution. The Unions have agreed to sit down at the table, which was also attended by some Bishops representing the Episcopal Conference.
"The most important thing is to restore the channels of dialogue and communication", said Steven Nunez, a government delegate, at the end of the meeting. The authorities have not yet quantified the overall economic effect of the strikes, but the main employers' association complained about the numerous cancellations and a decrease of tourists because of the strike, travel agencies report up to 50% of cancellations. (CE) (Agenzia Fides, 20/09/2018)