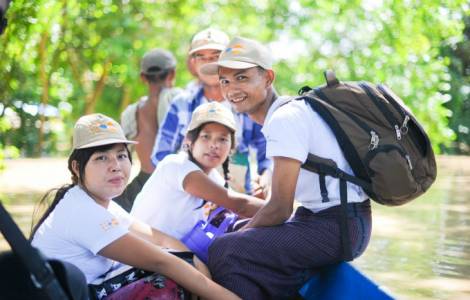 Yangon (Agenzia Fides) - The Church in Myanmar, in collaboration with the Jesuits of Myanmar, has set up a new institute to train young people in leadership skills and make them the agents of transformation of society. The new institute, called Myanmar Leadership Institute (MLI), which opened its doors in Yangon, aims to train young people on issues of ethics, analytical skills, professional skills and lifestyles in the education sectors, in the business world and of civil society, explains Jesuit Joseph Anthony Jacob, Director of the structure, to Fides.
The aim is "to develop leaders whose knowledge is inspired by compassion and contributes to nation building, inclusive prosperity, peace and the restoration of human rights for all", adds the Director.
MLI is an initiative of the Archbishop of Yangon, Cardinal Charles Bo, and the Jesuits of Myanmar. The motto of the Institute is ‘Learn to be a leader to serve’". Fr. Jacob tells Fides: "We are all leaders in one way or another. Leadership springs from within. It shows what I am. Good leaders welcome every opportunity to get to know themselves and the world and proceed to new discoveries and interests".
The Jesuit continues: "A leader is essentially a pilgrim, not one who thinks he is 'successful', or already perfect". A leader is one who becomes fully human within himself, but also fully alive to face the harsh realities: leadership is a way of being proclaimers of the Gospel and prophets for the poor and the marginalized".
MLI aspires to train students in Myanmar to become "agents of social change". The Institute's curriculum has been developed through a group of experts in the fields of education, entrepreneurship, civil society, and University of Manila, run by Jesuits in the Philippines, which guarantees the recognition of the studies carried out.
Father Jacob hopes that, at the end of the training program, graduates are ready to enter NGOs, religious communities, in the public and private education and health system, in government agencies, in the business world of commerce.
"We hope to train leaders who are capable but also compassionate, who are able to think critically and creatively, oriented towards the service of the common good, according to values of justice, solidarity and preferential option for the poor", he concludes. (SD) (Fides Service, 14/9/2018)