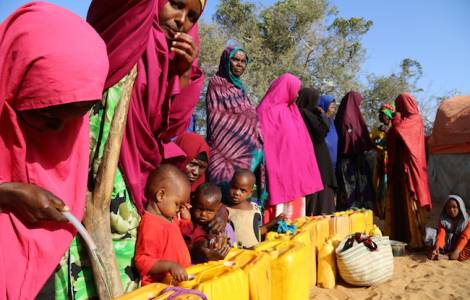 2017-11-14
Elections in Somaliland, Mgr. Bertin: "Democracy is possible in the Horn of Africa"

Mogadishu (Agenzia Fides) - Security is still a problem and relations with local institutions are not always easy, but Caritas Somalia continues to work with Somalis and for Somalis. "Our work is complex", explains Maria Jose Alexander, a Mexican, who has been director of Caritas Somalia for a year, to Agenzia Fides. "We have to work in difficult situations. In many areas of the Country there are still jihadist militiamen of al Shabaab (organization linked to al Qaeda). These are financed by the abductions of foreigners and by local "tax" style mafia. For those who are not Somali, it is difficult to reside on a permanent basis in the Country. For this reason, we use local collaborators. One must not forget the frequent attacks, even if those, unfortunately, affect everyone".
Somalia has been living a civil war for 27 years, which has led to a state of almost anarchy. Once dictator Siad Barre’s regime ended in 1991, the Country divided. In the North, in the region of former British Somalia, Somaliland was born, a self-proclaimed State that is independent but not internationally recognized. The semi-autonomous region of Puntland was born in the North-East, which is also relatively stable. Somalia remained in the South, led by a weak federal government that enjoys the support of the African Union and the international powers (United States, Great Britain, France, Italy and Turkey), but controls only a part of the coast and a few areas of the capital Mogadishu.
Despite this, Caritas Somalia has four projects in the country. In Somaliland, it is engaged in supporting about forty children living in displaced camps in Hargeisa. Caritas supports them in the educational field and provides them with medical care, books and food. Also in Somaliland, an agricultural project is active in Burao. In collaboration with the NGO "Seed", farmers are taught the most advanced cultivation techniques and, above all, irrigation systems that allow efficient and economical use of water. In Baidoa, 250 km from Mogadishu, a small school was created in one of the 300 refugee camps in the region. In addition to keeping 100 children in school, a water cistern was built to serve the local community. Finally, in Puntland, a dual project for professional training was set up for 50 midwives (fundamental in a country where there are 0.03 doctors per thousand inhabitants compared to 4/1000 in Italy) and farmers (transmitting not only the techniques to cultivate, but also the good practices to protect the environment).
Caritas Somalia has good relations with both the federal and local authorities. "It has not always been easy", remarks Maria Jose Alexander. "In the past there were misunderstandings especially about the nature of our organization. Some politicians feared that we would work to convert the Somalis. But we are only committed to supporting the local populations and we have great respect for their Islamic faith. We have clarified the misunderstanding and now we operate in full harmony with the institutions. Hoping that peace can return soon throughout the country". (EC) (Agenzia Fides, 8/9/2018)

ASIA/KAZAKHSTAN - Agriculture and tailoring projects during confinement at Ark Village

AMERICA/NICARAGUA - The Bishops: "We urge rulers and all sectors of the country to seek and find alternatives and solutions"