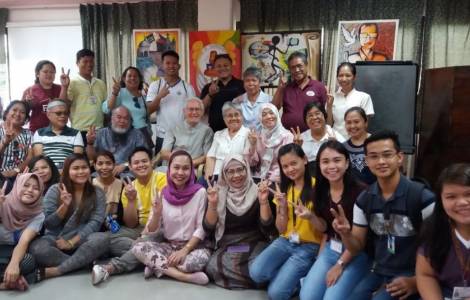 Marawi (Agenzia Fides) - In Marawi, a town on the island of Mindanao made famous by the occupation of jihadist groups linked to ISIS (Islamic State) in 2017, and destroyed as a result of the siege by the army of Manila, the Forum "Silsilah" (which means "chain"), sees the rebirth of the movement for Islamic-Christian dialogue founded in the South of the Philippines by the missionary of the Pontifical Institute for Foreign Missions (PIME) Fr. Sebastiano D'Ambra.
As reported to Fides by Fr. D'Ambra, in recent days the Silsilah movement has organized two events in the area of Lanao, where Marawi is located, involving the Muslims of the Maranao ethnic group, a majority in that province. During the Marawi meetings "we relaunched the Silsilah Forum after the sad experience of the siege. The participation was encouraging, with the presence of many leaders, especially Maranao women, young people, friends of Silsilah in other cities, new members who intend to become promoters of dialogue and peace", says Fr. D'Ambra.
The siege of Marawi will be remembered in history as one of the most painful experiences of violence in Mindanao. "The seeds of violence come from ideologies that use religion as a cover for plans and geopolitical strategies, introduced in the past in Mindanao, through groups such as Abu Sayyaf. The siege of Marawi was Isis’ strategic plan, with the help of a local group called Maute, the voice of Isis in Mindanao", recalls the PIME missionary.
With the rebirth of the Silsilah Forum in Marawi, continues Fr. D'Ambra, "we wish to say that there is hope in the midst of divisions and conflicts. Many good Maranoo and Christian Muslims from Lanao are ready to rebuild broken hearts. Reconstructing the city of Marawi still remains a question mark, but Silsilah is a witness of good signs of reconstruction in society, starting from the Maranao women, wishing to recreate harmony and cohabitation". The head of the Silsilah Forum in Marawi is in fact a Muslim woman, Prof. Jamila-Aisha Sanguila, professor of Islamic history who is involved in Silsilah: the woman has accepted the challenge of the "new beginning" in Marawi.
"In Marawi, we reaffirmed the spirit of Silsilah, supported by the 'spirituality of life in dialogue' and by the culture of dialogue as a path to peace. We recalled the spirit of the 'great Jihad' which is the inner journey of purification: the guide is the page of the Beatitudes for Christians, the teaching of 'mercy and compassion' for Muslims. These points are the foundation of the Silsilah movement, a supporter of a spirituality that embraces dialogue in four directions: with God, with oneself, with others, with creation", concludes Fr. D'Ambra. (PA) (Agenzia Fides, 5/9/2018)